Draghi takes swipe at US for talking down dollar 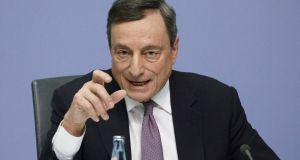 Mario Draghi, the president of the European Central Bank, took a swipe at the Trump administration for talking down the dollar, accusing it of flouting international rules to prevent currency wars.

Mr Draghi hit back at US treasury secretary Steven Mnuchin who said in Davos on Wednesday that a weaker dollar was good for US trade, breaking with the strong dollar policy of previous US administrations. Mr Mnuchin’s intervention reignited speculation that Washington will try to devalue the greenback to boost export sales as part of its “America First” agenda.

The waters on the issue muddied on Thursday evening, however, with the US currency moving higher after US president Donald Trump said he’s on board with a stronger dollar.

Mr Trump, who arrived in Davos on Thursday, told CNBC that “the dollar is going to get stronger and stronger and ultimately I want to see a strong dollar.”

He also said that comments on a weaker dollar from Mr Mnuchin had been misunderstood. Earlier, Mr Draghi had pointed to an agreement between economies – including the US – last October not to talk down their currencies. Some of the recent volatility in exchange rates had been caused by “the use of language...that doesn’t reflect the terms of reference we have agreed”, he said.

Asked directly about whether the Trump administration was a cause for concern, Mr Draghi was more explicit still. “Several members (of the ECB governing council) expressed concern,” he said. “The concern was broader than simply the exchange rate, it was about the overall status of international relations right now.”

Despite Mr Draghi’s insistence that the ECB would consider loosening its monetary policy should a weak dollar lead to an “unwarranted tightening” in the cost of money in Europe, the shared currency continued its surge against the greenback.

After the ECB earlier left monetary policy unchanged, Mr Draghi acknowledged currency appreciation was the main risk to the region’s growth prospects. But he pointed to stronger than expected growth in the euro zone and concluded “by and large the risks to growth are balanced”. Earlier the ECB kept its interest rates at record lows and reiterated its commitment to keep its crisis measures in place until inflation pressures mount.

The ECB’s tone is likely to change at its next meeting in March, with Mr Draghi acknowledging the bank needs to focus less on bond purchases and more on other policy measures. – © 2018 The Financial Times