The Iseq Overall Index underperformed its peers and closed down by 1.53% 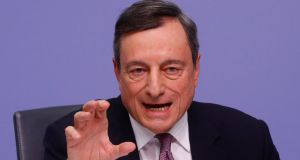 News in foreign exchange markets far outweighed that in equities on Thursday as the euro surged to a three-year high after European Central Bank president Mario Draghi said economic data pointed to “solid and broad” growth with inflation likely to rise in the medium term.

Following comments from US treasury secretary Steven Mnuchin on Wednesday, the dollar failed to regain ground amid concerns around US protectionism.

Additionally, the ECB kept its ultra-easy monetary policy on hold.

Ireland’s benchmark index underperformed European peers on Thursday and closed down by 1.53 per cent.

Leading the losers on the day was Swiss-Irish bakery company Aryzta, which is dual listed in Switzerland and Ireland. On the Iseq, the company fell by 20.89 per cent to €25.51 after issuing a profit warning in the morning. The company attributed its lower profit forecast to weakness in its US and European markets.

One of the few gainers on the day was Bank of Ireland which closed up by 2 per cent at €8.15. The move followed a research note issued by Davy stockbrokers which upgraded the bank’s price target. AIB, meanwhile, fell slightly on relatively good volume.

A number of big trades in property related stocks saw Glenveagh Properties edge higher by 0.81 per cent. Hibernia Reit and Green Reit also had busy days on the stock market but fell by 1.72 and 1.27 per cent respectively.

Another weak sector on the day was the airline sector and budget airline Ryanair fell by 1.81 per cent to €16.30 in line with its peers.

The UK’s top share index fell for a third straight day as a deepening global sell-off in the dollar strengthened sterling and dented earnings prospects for British companies exposed to the US currency.

Drinks maker Diageo dipped 0.2 per cent after saying it expected foreign exchange swings to take a bigger than expected bite out of sales and profits. Among other big dollar earners, aerospace company Rolls-Royce fell 2.3 per cent and British American Tobacco fell 2.1 per cent.

The euro Stoxx index fell 0.4 per cent after hitting a one-week low, after the single currency spiked higher following remarks from Mr Draghi.

Among the biggest gainers were Spain’s Bankinter and Caixabank and Italy’s UniCredit and BPER Banca, all up more than 2 per cent.

Elsewhere among outstanding movers, Swiss software company Temenos rose as much as 18 per cent in heavy volumes, hitting a fresh record high.

Clariant fell 8.1 per cent as activist investor White Tale sold out of the speciality chemicals group after failing to win an independent strategic review and board seats.

STMicroelectronics rose 0.7 per cent after the chipmaker said auto and industrial demand would offset a seasonal smartphone dip in the first quarter.

The S&P 500 was little changed on Thursday as early gains spurred by solid earnings reports and a decline in the dollar evaporated.

Caterpillar’s profit trounced forecasts for the seventh straight quarter on Thursday as buoyant global demand from construction, mining and energy industries drove a 35 per cent surge in equipment sales. Its shares, however, reversed course after opening higher as investors took out profits in a stock that has risen around 80 per cent in the past year.

After the close of trading on Thursday, results are expected from Intel and Starbucks.