Datalex takeover talks, Conrad Hotel sale and food to fly off the shelves 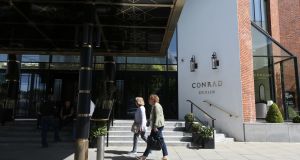 The sale of Dublin’s five-star Conrad Hotel is expected to be concluded shortly for around €118 million.

Datalex, the troubled Dublin-listed retail software provider to airlines, was in takeover talks with an overseas company before it was forced to issue a profit warning earlier this year, The Irish Times has learned. Joe Brennan has the details.

The sale of Dublin’s five-star Conrad Hotel is expected to be concluded shortly for around €118 million, write Ronald Quinlan. The hotel’s current owners have entered into exclusive talks with European hotel investor, Archer Hotel Capital BV, with a view to completing the transaction in the coming weeks.

Ireland’s growth as an international business hub rather than Brexit was the driving in attracting global law firm DLA Piper, according to its chairman emeritus, former US senator George Mitchell. Simon Carswell reports.

The State’s data privacy watchdog is “intensively pursuing” answers from WhatsApp to find out if and how many European users are affected by a security breach in the popular messaging app, writes Simon Carswell.

Former Cartrawler chief technology officer Bobby Healy is thinking big – hoping to build a worldwide drone delivery system. His first target is takeaways and he is confident of getting Irish Aviation Authority approval for his company Manna. Charlie Taylor reports.

Toys are getting more high-tech all the time. They may be cute but Marie Boran warns unsuspecting parents to be on their guard that smart toys aren’t eavesdropping on you or your children.

As rival renewable projects battle each other for investment and to persuade communities to allow them erect their infrastructure, a Dutch solar team has looked elsewhere – the sea. Peter Cluskey explains.

Crazy ideas can deliver genius innovation and invention. That’s the thesis of physicist and business guru Safi Bahcall, whose latest book looks at ideas that are now seen as seminal but were initially widely dismissed and ridiculed. Richard Gillis has the details

In this weeks Inside Business podcast: Conor Faughnan of AA Ireland and Irish Times markets correspondent Joe Brennan join Ciarán to discuss how the Eyropean Commissionin vestigation into Insurance Ireland could play out. Also, chief economist at Manulife Investment Management, Megan Greene, and Cliff Taylor of the Irish Times on the latest developments in the US-China trade war and how markets have responded to its ratcheting up in the past week.

Cantillon ponders Michael O’Leary hanging up his racking silks and the dangers inherent in runaway tech.

Our weekly columnist Karlin Lillington says it is hard to say which is worse: a barely-regulated global spyware industry that counts the most abhorrent states and agencies as valued clients? Or the governments that buy that industry’s tools, or gather sensitive data and develop cyber weapons they fail to adequately protect?

In case you missed them with not check our our Top 1000 Irish companies and our Business Awards sites.