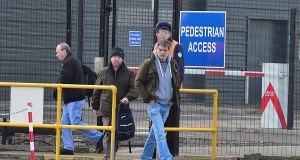 Nine months ago the Canadian aerospace firm Bombardier confirmed that it intended to reduce its Northern Ireland workforce by 1,080 people between this year and next, as part of a “global downsizing” strategy. Photograph: Arthur Allison/Pacemaker

A Craigavon-based firm, AJ Power, has recently supplied and installed a standby generator at the top of Table Mountain in South Africa.

The generator was manufactured at the company’s headquarters in the North, which employs 80 people, and then installed by its South African subsidiary FGW Generators.

The tourist attraction draws more than 900,000 visitors a year and the 280kVA generating set will provide “security of power” for the attraction’s upper cable station and its restaurant.

Diesel generating sets manufactured by AJ Power are currently in use in more than 80 countries.

But while there story is a good example of a local firm flourishing on the international stage, there are many dark clouds lingering above the North’s manufacturing sector, with the threat of a post-Brexit storm also looming.

There are fresh concerns about further job losses at Bombardier’s operations in the North following the Canadian group’s decision last week to cut yet another 7,500 jobs from its global workforce.

Nine months ago Bombardier confirmed that it intended to reduce its Northern Ireland workforce by 1,080 people between this year and next, as part of a “global downsizing” strategy.

As a result Bombardier, one of the biggest private sector employers in the North, has seen its workforce drop below 5,000.

In a statement, local management said it “will be evaluating the impact on our Belfast operations and will communicate with our employees when that is completed. We are not in a position to elaborate further at this time.”

But there is no doubt that when Bombardier sneezes a sizeable proportion of the North’s manufacturing sector catches a cold.

According to Stephen Kelly, chief executive of the campaigning organisation, Manufacturing NI, every job in Bombardier supports at least 1.5 jobs in smaller manufacturing firms that are key suppliers to the aerospace company.

“The impact of direct job losses in Bombardier have a knock-on effect in the wider economy because not only do they impact on companies from the north-west to north Down, but the fact is that those salaries – and Bombardier jobs are well-paid jobs – also disappear,” Kelly warns.

He says the accumulative impact of job losses at major manufacturing firms in the North in recent years such as the closure of the tobacco firm JTI in Ballymena, the ongoing shutdown of the tyre manufacturer Michelin and the various redundancy programmes at Bombardier have had a snowball effect on the local manufacturing sector.

Manufacturing NI and Unite want the North’s Executive to develop an industrial strategy that will enable the local manufacturing sector to grow by 20 per cent. Scotland and the Republic both have specific strategies in place which helped foster the right conditions for manufacturing firms to grow and in turn create new jobs.

Kelly says: “Without an industrial strategy Northern Ireland is going to be more exposed. Northern Ireland’s manufacturing sector employs more than 85,000 people and contributes more than £18 billion in sales – of which £14 billion are external.

“But there are opportunities to do more – even with all the uncertainties that lie ahead because of Brexit. We want our politicians to do more – to be more ambitious because we need to address the challenges that exist such as high energy costs and high transport costs to win new foreign direct investment and ensure that we are well placed to deal with whatever Brexit throws at us.”

Jimmy Kelly, the regional secretary for Unite, estimates that 6,000 manufacturing jobs have been lost in Northern Ireland over the last two years alone – and he is not confident that these jobs will be replaced by an “equivalent value”.

Latest research from Manufacturing NI shows that following the sharp devaluation in sterling many local manufacturing businesses, particularly family-owned firms, have taken a hit on margins and profitability in order to win orders.

“The cost of raw materials in some cases is running at three times the price that some firms can charge customers – businesses just cannot sustain that,” he said.