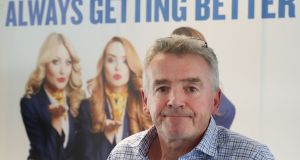 Dairygold Co-operative Society says it has up to €100 million to spend on an acquisition to help kick-start its new health and nutrition division. Mark Paul has the details.

Irish property developer Ballymore has appointed former IPL Plastics executive Pat Dalton as its new group finance director, effectively making him the third most senior executive in the company behind its co-founder Sean Mulryan, and his son John Mulryan, who is the group’s managing director. Ciarán Hancock reports.

Is Ryanair right to be optimistic about a substantial increase in passenger numbers later this year? Cantillon says yes but only if certain factors outside its control go in its favour.

Cantillon also looks at the IMF’s suggestion for a “solidarity” tax, to be paid by those who have done well during the pandemic to help meet the mounting bills from lockdown restrictions.

A commission set up to examine the future of media in Ireland has so far cost the taxpayer almost €240,000. Ken Foxe goes through the numbers.

Digital workflow company ServiceNow is to add 300 jobs at its Dublin office as part of its plans to expand in Europe, the Middle East and Africa. Ciara O’Brien reports.

In technology, Ciara O’Brien reviews the Dyson V11 Outsize and finds that while the new vacuum cleaner is perfect for larger homes it does have some drawbacks

In Innovation, our columnist Chris Horn tries to get his head around the world of “headless” online commerce.