ServiceNow to add 300 jobs at its Dublin office

Roles will be in areas such as cloud, research, product and digital sales 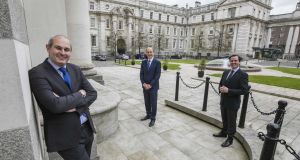 Digital workflow company ServiceNow is to add 300 jobs at its Dublin office as part of its plans to expand in Europe, the Middle East and Africa.

The company said the jobs would be created over the next three years, with areas such as cloud, research and development, product and digital sales the primary target. There will also be select hiring across marketing, finance, legal, procurement and other corporate functions. Positions will be available for those starting out in their careers as well as more senior roles.

“We do see Ireland as growing and all those teams growing in that regard,” said Mark Cockerill, Dublin-based vice president of ServiceNow said. “We’ve added vice-presidents here as well, and we’re going to continue adding key leaders in Dublin equally, so it’s a key strategic build out for us.”

“We first announced in 2019 we were going to create 120 to 130 roles by 2022,” Mr Cockerill said. “We’re a year ahead of schedule on that, even with a global pandemic. That’s because we’ve seen the talent pool, we see it as a great place to expand our EMEA footprint.”

The news was welcomed by Taoiseach Micheál Martin. “This is a huge vote of confidence by an innovative company in Ireland’s tech ecosystem and talent base,” he said. “The Government’s mission in the coming months and years is to get people back to work and rebuild our economy, while at the same time ensuring Ireland remains well placed to thrive in the new green and digital economy of the future, with high quality, sustainable jobs.”

The company has been supported by IDA Ireland, with the latter’s chief executive, Martin Shanahan, stating that the move was a “notable win” for the country.

The growth in the business has been fuelled by an increase in interest in digital business as the pandemic and its accompanying restrictions drove a shift towards digital transformations for companies.

The company has what it classed as a market-leading 2020, with revenues hitting $4.5 billion, a 31 per cent increase year on year.

The new expansion will take the total number employed at the Irish operation to 400 people, and Mr Cockerill expects that it will be able to fill a large number of the roles from the talent pool already in existence in Ireland.

ServiceNow will also expand its space at the Sharp Building in Dublin city centre.

However, it has yet0 to decide how its future workplace will look once the pandemic has ended and life returns to some semblance of normal.

“I think trying to plan exactly where these roles and what the new normal is going to be is impossible at this moment in time.”