CSO figures surprise on the upside, but risks remain

Economists see no basis for upgrades “just yet” 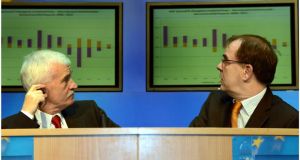 
Yesterday’s 2012 GDP figures from the CSO matched exactly with the expectations of the Government, which had built 0.9 per cent growth into its economic plans.

For most other economy-watchers, the outcome surprised on the upside, with the most striking positive coming in the performance of the domestic economy.

It isn’t powering along in Tiger fashion but the figures suggest it is stuttering slightly less than before, with an annual drop of 0.9 per cent in consumer spending, a better outcome than many had expected.

Furthermore, a 1 per cent quarterly expansion in consumer spending on a seasonally adjusted basis offers some hope for a more robust domestic economy this year.

Alongside this, investment was up by 1.2 per cent for 2012 as a whole, again ahead of most forecasts and helping to balance against a 3.7 per cent drop in Government spending.


Domestic reawakening?
A sense that the State’s slumbering (and cash-strapped) consumers and businesses could be ready to reawaken is particularly welcome in light of our export performance, which has been verging on the anaemic of late.

Last year’s export growth, while positive, was the lowest in three years. This reflected both weakness in exporters’ main markets, notably the euro zone, and continuing declines in pharmaceutical sales. It remains to be seen how the export picture will develop over the year, particularly in light of uncertainty in Cyprus and its consequences for the wider European economy, but a sense that the domestic picture is brightening offers some encouragement amid the uncertainty.

If the economy can sustain the rise in employment recorded by the CSO last month, there will be more reason for optimism.

A breakdown of last year’s export figures shows that services exports expanded by 7.5 per cent in the fourth quarter, compared with the same period in 2011. This compared with a decline of 3.8 per cent in goods exports, which reflects trends already seen in industrial production.

The Minister for Jobs, Enterprise and Innovation, Richard Bruton, yesterday welcomed a 15 per cent increase in computer services exports (to €36.5 billion) last year, which fits into the Government’s plans for the sector. Austin Hughes at KBC wondered if services exports might be less vulnerable to cyclical weakness abroad.

this year
Most observers expect the economy to grow again this year, but not by enough to get anybody too excited.

Alan McQuaid in Merrion has pencilled in real GDP growth of 1.6 per cent, noting “clear evidence” of the Republic weathering the storm better than most. Juliet Tennent in Goodbody expects “a gradual economic recovery”, while Davy’s Conall Mac Coille in is forecasting 1.3 per cent growth for GDP, with the latest numbers doing little to derail this.

Hughes at KBC said the data implied “a margin of comfort” within his 1.3 per cent GDP prediction for this year but, highlighting the Cypriot problem, a downgrading of growth in the UK and weak PMI data for March, he expressed a reluctance to upgrade “just yet”.