Gannon on target to enlarge Clongriffin 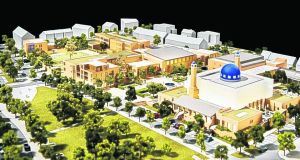 Development work is expected to get under way early next year on an Islamic Cultural Centre including a large mosque at Clongriffin on the northern fringe of Dublin city following the granting of planning permission for the ¤40 million complex by Dublin City Council.

The six-acre campus is being promoted by a Dublin-based Muslim group and will be developed by businessman Gerry Gannon on part of the extensive lands he owns at Clongriffin.

City planners have banned the use of public address announcements or a call to prayer which could be audible outside the centre.

The other elements of the development will include 38 primary and secondary classrooms, a multi-use community hall, fitness centre including swimming pool, gym and sauna and 14 staff apartments.

Funding for the development has apparently been promised by a group of wealthy individuals as well as charitable organisations in the Middle East.

The promoters have made it clear that the amenities will be available not only to the Muslim population but to families of other faiths and no faith in the interests of promoting harmonious relations.

The centre is expected to cater for more than 500 people for Friday night prayers and up to 5,000 for festivals.

Dublin’s other main Mosque at Clonskeagh – there is also a small one at South Circular Road – caters for only a small percentage of the 30,000 Muslims living in the greater Dublin area.

The Clonskeagh mosque has blended in well with its neighbourhood.

Important coup
The Clongriffin project will be seen as an important coup for Mr Gannon who has spent millions of euro on providing top class amenities in the new town of Clongriffin including a Dart railway station, a street network, 460-space park-and-ride facility, supermarket and department store as well as a range of shops.

Gannon Developments is expected to sell newly built homes to many families using the cultural centre.

The company resumed building houses in Clongriffin where it has planning permission for a large scheme.