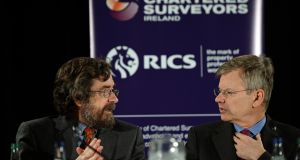 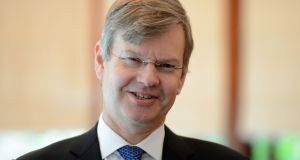 28/09/2012...FINANCE....Stefan Gerlach, deputy director of the Central Bank of Ireland before speaking at a luncheon of the German-Irish Chamber of industry and Commerce in dublin today (Fri). Photograph: Frank Miller /THE IRISH TIMES

Risky lending by the banks is not the solution to the housing crisis, the deputy governor of the Central Bank, Stefan Gerlach, has said.

Referring to rules on loan to value (LTV) and loan to income (LTI) ratios introduced by the Central Bank’s earlier this year, he said an examination of what had happened when the Irish property market crashed showed that loans with high ratios had very high default rates.

Loans issued close to the crash with LTVs between 80 and 90 per cent, had a default rate of 23 per cent, while those with LTI multiples of 5 to 5.5 had default rates of approximately 20 per cent.

These types of loans were always risky, he told the annual conference of the Society of Chartered Surveyors Ireland. The Central Bank’s rules were introduced to increase the stability of the financial sector.

Similar rules are being introduced or have been introduced in other jurisdictions because “property bubbles happen across the world all the time”. Another reason was because banks used to be more conservative in their lending policies.

An examination of property prices back to 1970 showed they had grown on average by 2 per cent a year, and that for 17 out of 44 years they had fallen, Mr Gerlach told the conference, which had the title Housing: the next generation.

He said it was still too early to say what the effect of the new rules had been but noted some evidence that they had dampened speculative buying in the market. While the rules might be altered once evidence as to their effect becomes available, they were “designed to be a permanent part of the market.”

The president of the society, Andrew Nugent, said the failure of the Government to introduce budgetary measures to address the shortage of housing was both puzzling and disappointing.

“Whilst we acknowledge and welcome the role of Nama in delivering houses, 20,000 units over the next five years is simply not enough. We need that level of volume each year.”