Residents fear Ballymore apartment repairs could cost up to €60,000 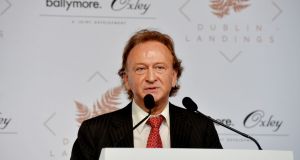 Residents of a London apartment complex built by Irish developer Ballymore say they fear necessary fire safety repairs could cost them up to €60,000 each.

The Sean Mulryan-controlled group is one of many in the UK that must upgrade existing buildings to meet new safety standards the British government imposed after a fire at a tower block in Grenfell, London, which killed 72 people, in 2017.

Residents in apartments the Irish company built in London say that Ballymore wrote telling them they must pay for the work through their annual service charges.

He added that residents were angered further by recent news that Ballymore Ltd, part of the group’s UK business, paid a €17 million dividend to shareholders last year.

“They can afford to pay that on the one hand but they are looking for us to pay for this on the other,” the resident said.

Apartment owners in the UK typically buy long leases on these properties, often 99 years or more, rather than freeholds, so are known as leaseholders.

Their agreements require them to pay service charges of around £1,000 a-year for their block’s upkeep and nominal annual rents of £50 or so.

Ballymore’s letter did not say by how much it would increase service charges. Leaseholders in London developments, including Westhampstead Square, where balconies must be upgraded, and Hoxton, fear they face a sharp increase.

Ballymore told The Irish Times that it would apply any costs that fell to leaseholders to their service charges over time and it would not seek immediate payment.

“If defects relating to the construction of the external walling system have been identified, we will cover the costs of putting them right,” the company said.

Ballymore maintained that other remedial costs would be recovered from the service charge.

For that reason, the company said that it was applying on behalf of leaseholders to the British government’s Building Safety Fund, set up to aid residents in covering some costs.

It has also applied to a separate ACM Fund, which covers the cost of replacing cladding materials partly blamed for the Grenfell blaze, on other buildings. Its New Providence Wharf development qualifies for this funding.

However, Ballymore conceded that work, including on features such as balconies, may not qualify for aid from the British government funds. It stressed that it would keep leaseholders informed of developments.

Around 12,000 apartment blocks throughout Britain are thought to need work to bring them into line with standards introduced by the government there since they were originally built.

Ballymore noted that local authorities officially confirmed that all of its buildings complied with regulations at the time of construction. The Irish group added that the safety of its residents and staff was paramount.