Residency refused to some non-EU citizens offering to pay €1m

Over 1,160 such citizens have bought right to live in Republic under Government scheme 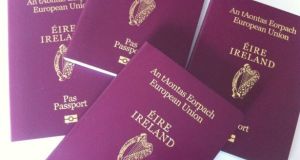 To qualify for the scheme applicants must show their net worth is a minimum of €2 million, while they have to pledge to invest at least €1 million into an approved project. Photograph: Bryan O’Brien

Officials have refused residency rights to some non-EU citizens offering to pay €1 million to be allowed live in the Republic under a Government scheme, according to the Department of Justice.

More than 1,160 citizens from states outside the European Union have bought the right to live in the State by investing at least €1 million into social housing, nursing homes or other businesses, or by giving up to €500,000 to charities, through the Government’s Immigrant Investor Programme (IIP).

But the department, which operates the programme, confirmed that its officials have also refused applications for the scheme from non-EU citizens who have failed to meet its criteria.

While the department did not say how many applications have been refused since the IIP began in 2012, agents who organise investment through it for businesses in the Republic say large numbers of applicants do not get approved.

Candidates are refused for “various reasons”, the department said, “including applicants not meeting the net worth requirements or projects not aligning with the objectives of the programme”.

To qualify, applicants must show their net worth is a minimum of €2 million, while they have to pledge to invest at least €1 million into an approved project. They must also be of good character.

No applicant has been refused for being politically exposed. This is defined as someone entrusted with a prominent public function. People in this category are regarded as an extra risk as they are potentially vulnerable to bribery, corruption or their position could be used for money laundering or other purposes.

The department said that being a “politically exposed person” is not reason on its own to be refused under the IIP, but is one of several factors that must be taken into account.

The Government imposed stricter tests in 2018 to keep pace with international standards used to monitor such schemes.

Not all businesses can get investment through the programme, only those involved in areas that the Government considers a priority, such as social housing, nursing homes and tackling climate change.

In recent weeks, property developer Bartra, housing charity Peter McVerry Trust and the National University of Ireland Galway (NUIG) have all confirmed that they availed of the IIP.

Peter McVerry Trust and NUIG used the charity option rather than seeking investment.