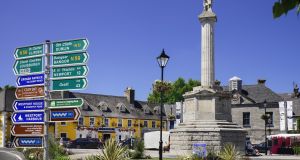 Westport in Co Mayo was singled out as a place that is attractive and “people-friendly”. Photograph: Eye Ubiquitous/UIG via Getty Images

The Urban Land Institute (ULI) in Ireland is seeking submissions for its inaugural “excellence in placemaking awards” to reward communities and organisations the improve their locales.

The institute, established by the real estate industry as a non-profit which promotes best practice in planning, is calling for “great” functional places – be they internal or external – “where people enjoy spending time”, according to John Bruder, the chairman of ULI Ireland.

“Very often what we do in our world and in the world of the urban environment is for decades and centuries. If you do good stuff, it lasts,” he said, singling out Westport as an urban environment that is attractive and “people-friendly”.

“It’s about driving standards,” said Willie Norse, an executive director of real estate company CBRE. “Development should not just be about pounds, shilling and pence and the returns entities can make. We’re firm believers in the quality of the environment.”

The institute is inviting submissions for the awards up until January 31st, 2019. The projects must be located in Ireland and demonstrate a high standard of design as well as relevance to the needs of the community in which it is located.

ULI will announce a shortlist next March with the winners announced in April.