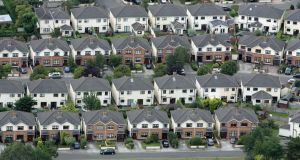 In April, housing completions were 72.7 per cent lower than they had been in the same month in 2019. Photograph: Frank Miller/The Irish Times

The number of new homes completed in the second quarter fell by 31.9 per cent as restrictions to curb the spread of Covid-19 had a “sizeable impact” on building activity.

The figures from the Central Statistics Office (CSO) show there were 3,290 new dwellings completed between April and the end of June, compared to 4,829 in April-June 2019. This was the first year-on-year decrease since the third quarter of 2013.

The drop in completions was least pronounced for apartments, which reported a 16.3 per cent year-on-year dip to 576 in the quarter. Two-thirds of these were in Dublin.

The State-wide shutdown of construction sites took its biggest toll in the month of April, when completions were 72.7 per cent lower than they were in April 2019. Just 402 homes were completed in the month, less than a quarter of the number of completions in March.

The CSO uses new domestic ESB Network connections as the primary source of its data, then analyses other sources to validate the information.

A little more than three-quarters of all new home completions were in urban areas. This was a broadly similar pattern to the same period in 2019.

Separately, some 793 bed spaces were completed in the student accommodation sector in the second quarter, the statistics body said.