New agency in talks with State bodies to find sites for 7,000 homes

Work could start next year on initial 3,000 homes built by agency, Minister says 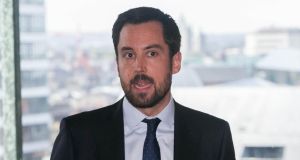 Minister for Housing Eoghan Murphy said the Land Development Agency is meant to ensure that the supply of homes in the Republic is no longer subject to boom-and-bust cycles. Photograph: Gareth Chaney/Collins

The head of the new Land Development Agency (LDA) said it was in talks with Government departments and State bodies about acquiring sites to build 7,000 new homes to follow the first 3,000 on which it plans to begin work next year.

The Government yesterday launched its promised LDA, saying it could build up to 150,000 new homes over 20 years on property owned by State organisations.

After the launch, John Coleman, the agency’s interim chief executive, confirmed it was in talks with several Government bodies on acquiring sites for 7,000 homes. This second group will make up the 10,000 dwellings that it has initially earmarked for State-owned land.

Mr Coleman did not name the bodies with which his agency is negotiating. However, Minister for Housing Eoghan Murphy said it had had discussions with the departments of defence, health, and public expenditure and reform (which controls large amounts of land through the Office of Public Works).

According to Mr Murphy, builders could begin work next year on 3,000 homes that the agency intends providing on eight State-owned sites in Dublin, Cork, Kildare, Meath, Westmeath and Galway.

The Minister said the agency was working on plans for those projects. “Our intention would be to have builders on those sites some time in 2019 or the beginning of 2020 at the latest.”

Government and State bodies must provide the agency with a list of sites that they own which they believe could be used for housing by October 23rd. Mr Coleman was unable to say how much land was likely to be available, but explained that his organisation was just beginning to gather information on this.

The LDA will have two key roles. The first will be to identify property in State control that is suitable for housing and build on it. The second will involve working with public and private owners to assemble a land bank to ensure a steady future supply of sites for residential construction.

Where public and private ownership overlaps, the agency can use compulsory purchase orders (CPOs) to force landowners to sell. Mr Coleman argued that this should be a last resort, as it would prefer to work with private interests to develop land. “CPOs are rarely used, but if we have to use the orders we will,” he said.

On some sites, the agency will hire construction companies to build homes. On others, it could lease or license land to developers on condition that they build to a strict deadline. A third option will be to work in partnership with private-sector businesses to provide housing.

All projects will include at least 10 per cent social housing and 30 per cent affordable dwellings. Mr Murphy indicated that these categories could make up half the 150,00 homes that the agency intends building.

Mr Coleman explained that in common with all developers, the agency will have to get planning permission from local councils or An Bord Pleanála for its projects. It will also work with local authorities and State bodies in drawing up master plans for publicly-owned land.

Both Mr Murphy and Mr Coleman signalled the new body would not clash with the National Asset Management Agency (Nama), which controls prime sites such as the Irish Glass Bottle factory in Ringsend, Dublin, which could hold 3,500 homes. Nama already loans cash to some developers for housebuilding.

Mr Coleman, who previously worked as Nama’s chief financial officer, argued the LDA did want to “add to complexity” where another body was already providing housing.

The Minister stressed that the LDA is meant to ensure that the supply of homes in the Republic is no longer subject to boom-and-bust cycles. “It will continue to build houses regardless of external economic conditions,” Mr Murphy said.

1 I want to change my will quickly in case I fall ill. Do I need a lawyer?
2 Coronavirus: Property rental in the jaws of the epidemic
3 Coronavirus: Aldi eases restrictions on purchasing products
4 WhatsApp limits message forwarding to slow spread of misinformation
5 MCD’s Desmond ‘optimistic’ that Electric Picnic 2020 will go ahead
6 Collison brothers worth an estimated €2.9bn each
7 Cold water poured on idea of ‘helicopter money’
8 NTMA raises €6bn from bond auction to help State meet Covid-19 costs
9 Staff in Dublin and Cork airports receive profit share and bonuses for last year
10 Irish back pain medical device group to pull stock market listings
Real news has value SUBSCRIBE