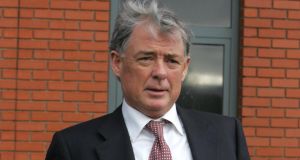 Seamus Ross of Menolly Homes: One of the subsidiaries set to be placed in liquidation is Brisa Developments, set up to build and sell houses in the K Club in Co Kildare. Photograph: Cyril Byrne

A number of developer Seamus Ross’s Menolly Homes group companies look set to be placed in liquidation at a creditors’ meetings today.

Mr Ross was one of the most active housebuilders in Dublin, through the Menolly Homes group, over the last decade. Last December he became one of the well-known developers to exit Nama when Cardinal Capital refinanced the final part of his group’s debts.

According to legal notices, Menolly Homes, Menolly Properties and Menolly Construction, along with six other group companies, will hold creditors’ meetings in Lucan, Co Dublin, today.

One of the subsidiaries is Brisa Developments, set up to build and sell houses in the K Club in Co Kildare. It signalled several years ago that it would be wound up once this was completed.

Menolly Homes was a big client of the former Anglo Irish Bank and its debt transferred Nama.