Development between Bray and Enniskerry will provide 658 housing units 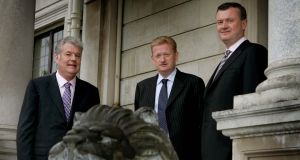 The Cosgrave Property Group has lodged a planning application with Wicklow County Council for a 658-unit housing development in Fassaroe.

The 48-hectare development between Bray and Enniskerry also includes substantial office and retail space as well as a district park and inland waterway.

The scheme forms part of the council’s master plan for the Fassaroe area, which was drawn up in 2010 but later mothballed on account of the financial crisis.

When complete, the plan will provide up to 1,800 residential units and link up with the Old Conna area of Dún Laoghaire-Rathdown, potentially forming one of the biggest blocks of new housing south of the capital.

The site, which is accessed from the N11/M50 motorway, will also be able to facilitate an extension of the Luas line from Cherrywood if necessary.

Planning for phase one, which was submitted to the council this week, provides for a significant residential development comprising 390 apartments and 268 houses, with 10 per cent earmarked for social and affordable housing.

The application also provides for three office blocks with associated parking, which will be located adjacent to a neighbourhood centre with a convenience store, six retail units, a cafe, a creche and a public plaza.

Developers have set aside 12-hectares of land for a district park with public amenities and children’s play zones, which will extend from Berryfield Lane to Ballyman Glen in Enniskerry.

The development will involve a revised road alignment from Thornhill Road roundabout to the area of Kilbride Lane roundabout, involving the removal of the latter and a new 2.9km distributor road through development to Ballyman Road. It also contains a pedestrian and cycleway link across N11 connecting to Dargle Road.

The council’s masterplan for Fassaroe will make a significant dent in the county’s housing needs and comes in the wake of the Government’s Action Plan for Housing, which is targeting an annual build of 25,000 units a year.

The three-phases of the council’s Fassaroe masterplan will extend up to the Old Conna area of north Wicklow, which is part of Dún Laoghaire Rathdown County Council (DLRCC).

DLRCC officials are preparing an update report on the planning status of council lands, including Old Conna, which will be presented to elected representatives at the council’s next meeting in October.

The Cosgrave Group, which is owned and run by brothers Joseph, Michael and Peter, is close to finishing an 1,800-unit housing development on the site of the former Dún Laoghaire golf club.