Deal will see Lagan’s workforce grow to more than 900 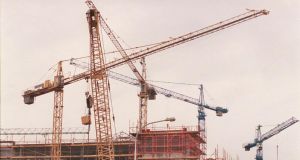 No redundancies have been announced following the deal which could see Lagan’s workforce swell to more than 900 people – making it one of the largest privately owned construction and civil firms North and South.

The Belfast-headquartered Lagan Construction Group has confirmed it has acquired rival Northern Ireland firm H&J Martin but did not disclose details of the deal which is likely to grow its organisation to a potential £300-million-a-year business.

No redundancies have been announced following the deal which could see Lagan’s workforce swell to more than 900 people – making it one of the largest privately owned construction and civil firms North and South.

The deal was backed by Danske Bank.

Chris Martin, corporate banking manger, Danske Bank, said it had worked with both Lagan Construction and H&J Martin for many years and was confident that the “significant” deal would “provide a platform for further sustainable growth”.

“It is good news for the construction sector and will have a positive impact on NI’s economy,” Mr Martin added.

Lagan is a third-generation privately owned, family controlled business which operates across numerous sectors, public and private and has developed an international reputation for delivering large scale civil engineering projects.

Originally established in 1962 by Peter Lagan, the group of Lagan companies separated five years ago and Lagan Construction is now owned by Michael Lagan, a leading local businessman.

It had been common knowledge for some time that Lagan and H&J Martin had entered into discussions regarding a possible deal.

H&J Martin is one of the North’s oldest building firms and has been continually in business since 1840.

Colin Loughran, chief executive of Lagan Construction Group, said even though the firm is now part of the Lagan group the Martin brand name is not going to disappear after 175 years of trading.

“As two family-owned and run businesses there are many similarities and synergies between Lagan Construction Group and H& J Martin.

“This will enable Lagan Construction Group to offer new integrated services to clients in both the domestic and international marketplace,” he said.

Meanwhile Derek Martin, managing director of H&J Martin said his company was “excited” by the new opportunities that the deal with Lagan would bring.

The North’s Enterprise Minister, Arlene Foster, is also optimistic that the enlarged Lagan Construction Group will “win and compete for large construction projects both at home and abroad”.

“The construction industry makes an important contribution to the economy here in Northern Ireland. In an increasingly competitive market place, having two large well known construction employers secure the future of over 900 jobs by combining their respective talents is a positive move,” the minister said.