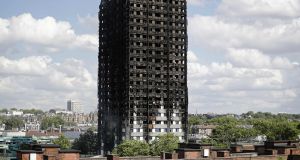 A file photo taken on June 15, 2017 shows the remains of residential tower block Grenfell Tower in west London on June 15, 2017, a day after it was gutted by fire.Photograph Tolga AKMENTOLGA AKMEN/AFP/Getty Images

A senior executive at Cavan-based Kingspan, which made combustible insulation used on London’s Grenfell Tower, said a builder who questioned its product’s fire safety should “go f*ck themselves”, the public inquiry into the fire has heard.

Philip Heath, a technical manager at the company, also said of a contractor trying to check what turned out to be misleading claims about the safety of its foam boards: “If they are not careful, we’ll sue the arse off them.” He also told friends that builders asking questions were mistaking him for “someone who gives a dam”.

The angry responses to the questioning of the material’s safety emerged in emails from 2008 shown to the inquiry into the June 2017 fire that killed 72 people. The inquiry is now examining the manufacture, testing and sale of materials used in the refurbishment of the high-rise in west London.

Kingspan Kooltherm K15 was one of two types of insulation used that turned out to be combustible. The inquiry has already heard from a former executive that the company was involved in a “deliberate and calculated deceit”, which involved marketing the product without solid test evidence. Kingspan has denied wrongdoing and said it did not know its material was being used on Grenfell.

Under cross-examination by counsel to the inquiry, Kate Grange QC, Heath denied his tone “reflected a culture in Kingspan at the time” but admitted: “It was totally unprofessional”.

Kingspan sold its insulation on the basis of testing carried out on an older version of the product that caught fire more slowly and emitted less heat. In 2008 Bowmer & Kirkland, a contractor, wanted assurance about the new version suitability for a tower called City Park.

Heath assured the builder K15 was “classified as class 0, or low risk” and said it was suitable for use in rainscreen facades, “and it’s deemed to satisfy”. At the time, however, the material was struggling to achieve a key safety standard. He sent a safety certificate relating to a test three years earlier on a less combustible formulation of the material.

Bowmer & Kirkland was not satisfied and replied: “You have not substantiated... on what basis the Kooltherm K15 is suitable for buildings over 18m?”

Heath forwarded this email to friends, saying: “I think Bowmer & Kirkland are getting me confused with someone who gives a dam. I’m trying to think of a way out of this one, imagine a fire running up this tower !!!!!?!!!! Any ideas??”

Asked by Grange why he mentioned a fire, Heath said he was trying to explain “some of the implications”.

Soon after the Bowmer & Kirkland’s query, another contractor on the same project voiced concerns. Wintech complained that the material was not suitable because its planned cladding had open joints so “external fire breakthrough... will be easier than the test sample”.

Asked by Grange whether these points were “entirely legitimate”, Heath agreed. But at the time, he told colleagues: “Wintech can go f*ck themselves.”

The inquiry heard last week that Kingspan threatened to take legal action against a certification and new homes warranty body, the NHBC, if it shared concerns with the market about the company’s evidence for its claims.

Asked why he did not take the questions seriously given that they related to “life safety”, Heath said: “I think we did take life safety seriously.”

Kingspan’s sister company, Kingspan Off-Site, also asked Heath about the fire performance of K15, and he did not divulge that it had performed worse in more recent tests than previously. He shared with a colleague what he was saying to Kingspan Off-Site to try to justify its use of the material, commenting: “I’m spinning so much I’m dizzy.”