Dispute arose over gas processing plant which was not built 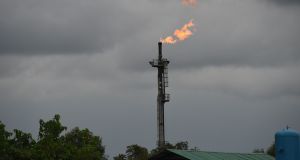 The Nigerian government says the scale of the damages is not warranted. Photograph: Pius Utomi Ekpei/AFP/Getty Images

An Irish-owned company is due to ask the British courts to enforce a $9 billion (€8 billion) award against Nigeria’s government in a dispute over a gas processing plant that was never built.

Process and Industrial Development (P&ID), a UK-registered firm linked to Dublin-based Industrial Consultants International, agreed in 2010 to build a gas refinery in Nigeria to fuel power plants for the African state.

However, the project never went ahead and P&ID and Nigeria’s government entered arbitration in 2012. The company was awarded $6.6 billion in damages in 2015 as a result. Subsequent interest charges have increased this to around $9 billion.

However, he stressed that P&ID was “open to a settlement on a reasonable basis” if it found someone in the Nigerian government willing to help resolve the dispute.

The Nigerian government issued a statement earlier this year contesting the size of the award.

Reports say that the administration argues that as the project never started, there was no physical work done, and therefore the scale of the damages were not warranted.

Mr Cahill has said that this was simply the Nigerian government’s attempt to evade dealing with the dispute. He also rejected what he called efforts to characterise P&ID and its founders as frauds.

P&ID agreed with the Nigerian government in 2010 that it would build a gas processing facility in which the country would hold a 10 per cent stake.

The processing plant was meant to refine gas and supply 85 per cent of it to the Nigerian government to fuel electricity generators.

P&ID was to be allowed to sell the remaining 15 per cent at commercial rates, paying 10 per cent of the revenue to the Nigerian government.

As part of the deal, Nigeria was meant to build a pipeline and secure gas supplies that could be shipped through this to the plant for processing.

P&ID blamed the government’s failure to do this for the project collapsing in the first place.

Reports say that P&ID offered to settle the case for $850 million in May 2015 while the arbitration was continuing, but a change of government in Nigeria appears to have prevented talks on that proposal from going ahead.

Industrial Consultants International is based on Stephen’s Lane in Dublin. Its most recently filed accounts show that the business had €1.2 million assets at the end of 2017. Mr Cahill was not available to comment.