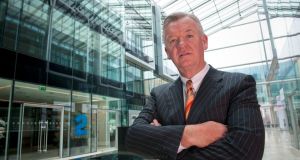 Bam Ireland chief executive Theo Cullinane: “The argument that we are too small a country to make a difference holds no ground.” Photograph: Michael Mac Sweeney/Provision

Builder Bam Ireland will spend €1.5 million converting its auto fleet to electric vehicles as it bids to cut greenhouse gas emissions over the next decade.

The Dutch-owned construction group is at the centre of the row over the projected €1.73 billion bill for the State’s new children’s hospital as it is the main contractor on the project.

Bam said at the weekend that it plans to halve the “carbon intensity” of its operations by 2030 as demands to tackle climate change move to the top of the political agenda.

As part of the move, the company intends to convert its motor fleet to all electric vehicles by 2040. A spokesman said Bam estimated the cost of this at €1.5 million.

Mr Cullinane said global body Science Based Targets Initiative, which determines whether businesses’ greenhouse gas targets are in line with the latest science, had approved his company’s target.

Bam noted yesterday that it is one of the first building companies to achieve this and is one of a limited group of 204 businesses globally with validated science-based targets.

Currently, the gas and oil that Bam uses account for 63 per cent of its emissions, while its vehicles produce about a third.

The company aims to cut this by 50 per cent, with a target of buying all of its electricity from renewable sources by 2020 and connecting projects to the national grid rather than using oil-fired generators.

Bam has also pledged to use cement whose carbon footprint is 16 times lower than the standard. Cement manufacturers emits high quantities of greenhouse gas.

The company noted that the Sustainable Energy Authority of Ireland recently warned that the Republic would miss its 2020 greenhouse gas reduction targets, and possibly its longer-term 2030 and 2040 goals.

“The argument that we are too small a country to make a difference holds no ground – climate change is a global problem that requires a global solution involving all countries,” said Mr Cullinane.