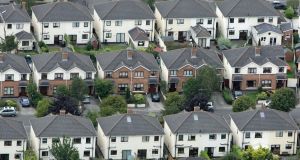 In its latest housing market monitor, the BPFI said housing supply will most likely revert to 2018 levels this year

The number of new homes constructed in the Republic this year is expected to be about 18,000 – 3,000 units less than last year, according to the banking industry lobby group Banking and Payments Federation Ireland (BPFI).

This is better than many had forecast given the severity of the lockdown here, which resulted in most of the State’s construction sites being forced to close in April and May.

In its latest housing market monitor, the BPFI said housing supply will most likely revert to 2018 levels this year.

The monitor, which uses BPFI data as well as a range of other published research for its assessment of the current state of the housing and mortgage markets, said: “The housing construction sector has been more resilient than anticipated in the face of the Covid-19 pandemic.”

“Before the pandemic, housing completions for 2020 were estimated to be around 25,000 units,” the BPFI’s chief economist Ali Ugur said.

“However, with the construction sector still operating at around 85 per cent of capacity at the moment in addition to significant lost output during most of the second quarter of 2020, it is unlikely that we will reach this output level, with completions expected to reach only 18,000 this year.”

The group also noted that mortgage drawdown activity has also seen a decline. The 15,350 mortgages drawn down to a value of €3.46 billion during the first half of 2020 reflects a fall of about 18 per cent and 16 per cent in volume and value terms, respectively, compared with the same period in 2019, it said.

Mr Ugur said: “While data from the Central Credit Register show that lender enquiries related to new mortgage applications fell by over 50 per cent between February and May of this year, by August this number had picked up again to the level observed back in February.”

He added: “First- time buyers accounted for around 57 per cent of the value of all mortgage approvals in July, which is the highest ratio since this series began in July 2014.”

Dublin 15 industrial and logistics site a prime opportunity at €10m

Why working in an office beats living at work

1 Air travel never going ‘back to way it was’
2 Will brother’s widow get half of our parents’ estate when they die?
3 Should I switch bank now with Ulster Bank at risk of closing?
4 Coronavirus vaccine: 15 billion doses needed to inoculate the planet
5 Why working in an office beats living at work
6 ‘Tax war’ will hit Ireland if digital tax talks fail, OECD says
7 Tánaiste urges businesses to brace for Brexit with 100 days to go
8 Irish architects Henry J Lyons chosen for Ireland House Tokyo project
9 Dublin 2 Georgian office HQ quoting €38 per sq ft
10 Dublin 15 industrial and logistics site a prime opportunity at €10m
Real news has value SUBSCRIBE