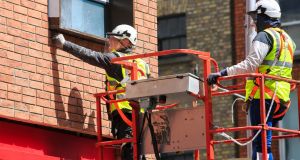 The unions Connect and Unite have served notice of industrial action on employers in the mechanical construction sector specialising in areas such as heating, ventilation and air conditioning services, a move which will impact on many large building projects.

The dispute is over a 2.7 per cent pay rise which unions said fell due at the beginning of September for the workers concerned, including plumbers and fitters.

Unite said that at a meeting on Tuesday with the Mechanical Engineering Building Services Contractors Association (MEBSCA) and the Construction Industry Federation, employers refused to commit to paying the 2.7 per cent pay increase.

Unite regional officer Tom Fitzgerald said: “The refusal by employers to commit to paying the agreed wage increase places them in breach of the MEBSCA collective agreement.

“Unions, therefore, had no choice but to issue employers with notice of industrial action. It is now up to the employers to resolve this dispute by paying their workers the agreed pay increases which fell due on September 1st. Otherwise they will face an autumn of determined industrial action.”

It is understood employers suggested there should be a reworking of the agreement over the coming weeks to take account of the impact of Covid-19 on the sector, and that this could come into effect by March.

Separately, workers in the general construction sector have voted for industrial action if employers fail to pay a 2.7 per cent pay increase scheduled to come into effect next month.

The pay rise is set out under the terms of a legally-binding sectoral employment order for the general construction sector.

However, earlier this year the High Court ruled that legislation allowing for the making of sectoral employment orders was unconstitutional. A stay has been put on this pending an appeal by the Government.

A number of unions representing workers across the construction sector organised protective ballots for industrial action to take effect if employers sought to reduce terms and conditions or not implement the provisions of existing sectoral employment orders.

The unions said on Tuesday that all sectoral employment orders currently in place “have the force of law”.

The construction industry committee of the Irish Congress of Trade Unions – comprising unions such as BATU, Connect, OPATSI, Siptu and Unite – said under the general construction sectoral employment order a pay increase of 2.7 per cent was due to be paid on October 1st.

It said employers were required to pay this increase, and a failure to do so would be a breach of the sectoral employment order and unlawful.

The general secretary of the Irish Congress of Trade Unions, Patricia King, said the ballot results showed that “workers in the construction sector are determined that employers will not be allowed to renege on their legal responsibilities, and we expect that employers will abide by the law and pay the 2.7 per cent increase”.

“Employers who fail to do so will be pursued and workers will take industrial action if necessary,” she said.

Chairman of the construction industry committee Billy Wall said : “Today’s result shows a real determination on the part of union members in the sector to defend their hard-won conditions of employment.

“Workers in the sector have worked hard during the public health emergency to keep construction sites open and working. The 2.7 per cent increase is the least they deserve.”

The Irish Times reported last week that the Government had rejected suggestions from the construction industry that it should intervene to defer pay rises due to thousands of building workers next month.

A spokeswoman for Tánaiste and Minister for Enterprise, Trade and Employment Leo Varadkar said the statutory increase due under the sectoral employment order for the construction industry would take effect from the beginning of October.

It is understood the Construction Industry Federation asked Mr Varadkar at a meeting recently “to use his office to defer the increase due in the current circumstances”.

Informed sources said that some building firms in the construction sector had agreed to pay the increase.

1 The wealth of the Irish – how do your assets match up?
2 KBC Ireland fined €18.3m for ‘unconscionable’ tracker scandal role
3 Will Facebook walk away from European market after data protection 'hissy fit'?
4 Dunnes Stores set to enter grocery delivery market
5 Irish company to test vaccines on volunteers deliberately infected with Covid-19
6 Dublin and Cork airports look at setting up pre-flight Covid testing centres
7 Air travel never going ‘back to way it was’
8 How to upgrade your home entertainment system for less
9 Should I switch bank now with Ulster Bank at risk of closing?
10 Willie Walsh joins CarTrawler as deputy chairman
Real news has value SUBSCRIBE