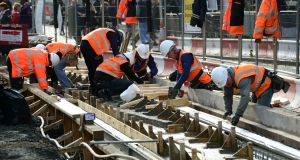 Civil and mechanical engineering group, GMC Utilities, whose projects include the Luas cross-city extension, saw pretax profits jump by 420 per cent in 2014 as turnover rose by more than 200 per cent.

According to newly filed accounts, the group, which was established by Gerry McCloskey in the late 1970s, reported pretax profits of €79.9 million for the 12 months ending December 31st, 2014. This compares with €26.3 million a year earlier.

The group, which reported operating profits of €10.3 million in 2014 compared with €1.8 million a year earlier, operates across a number of areas including renewable energy, sewers, smart metering, telecommunications, transport, urban renewal and energy. Its clients include Bord Gáis, Dublin Airport, Eir, ESB, the Office of Public Works, the Railway Procurement Authority and Waterways Ireland.

Employee numbers rose from 33 to 58 over the year under review with staff costs, including wages and salaries, jumping from €1.88 million to €3.04 million.