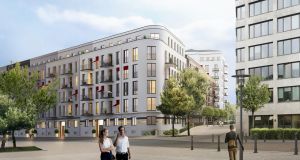 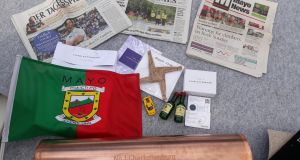 Mayo memories: While former taoiseach Enda Kenny is friendly with Cannon & Cannon founder Cathal Cannon, the Berlin project is being managed by the next generation: Charles, Denis and Ann Cannon 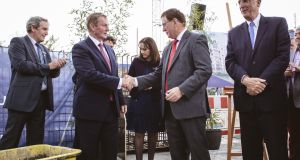 “I can testify to the quality of the work that Cannon & Cannon will do here,” Enda Kenny said in Berlin. “We have a lot to learn from the way Germany has moved in housebuilding: insulation, efficiency, emissions.”

Enda Kenny’s visit to Berlin last week was different from his last few trips to the German capital. Instead of rushing in and out of meetings with chancellor Angela Merkel, the former taoiseach had time to see a bit of the city, in particular a building site on the banks of the River Spree.

“This is a very special location in Berlin,” he said, standing in front of two large cranes, before helping lower into the ground a time capsule. Among its contents: a St Brigid’s cross, and copies of The Irish Times and the Mayo News.

The latter was a nod to the developers behind Number 1 Charlottenburg: the Cannon family company from Mayo.

“I can testify to the quality of the work that Cannon and Cannon will do here,” said Kenny. “We have a lot to learn from the way Germany has moved in housebuilding: insulation, efficiency, emissions.”

While Kenny is friendly with company founder Cathal Cannon, the Berlin project is being managed by the next generation: Charles, Denis and Ann Cannon.

A decade after buying the prime site, property prices are soaring in Berlin and Ann Cannon says interest in the development is far greater than their initial target market of professional couples in the 40-60 age group.

“We’ve had everything from retirees, who want to move to a groovy city, to families and international investors,” she says.

The project comes amid heated debate in Germany on housing, with rising property prices and rents a dominant issue in Sunday’s federal election.

In many ways, Germany’s property boom is a result of the euro crisis. That jolted awake the market here as international investors came, liked what they saw – an undervalued market and safe haven – and piled in.

Site prices in major cities have rocketed and, in the decade since the Cannons bought their Berlin site, the average apartment price has jumped 160 per cent to more than €250,000. Yet the German capital is still only in 12th position in Germany’s league of most expensive cities. 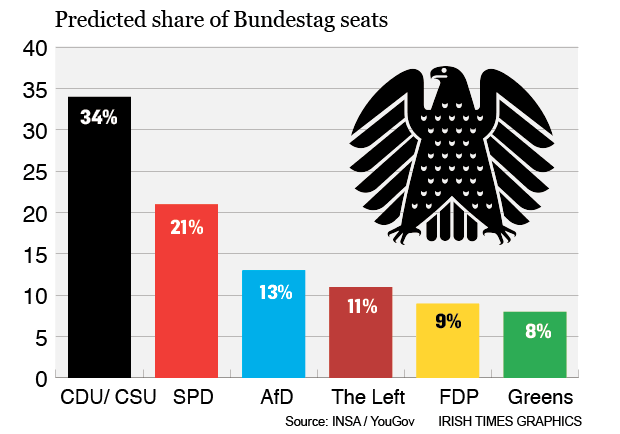 Topping the list is Munich, where the average price of new apartments are almost twice that of Berlin at €422,000.

“It’s hard to say whether the top of the market has been reached,” says Jacopo Mingazzini of Accentro, which compiles property sales prices across 80 German cities, for the Süddeutsche Zeitung daily. “As long as interest rates remain low and the zuzug [influx] to cities continues, the situation won’t change.”

With expectations of a European Central Bank interest rate hike next year, Germany’s central bank, the Bundesbank, has warned that property in German cities is 10 to 15 per cent overpriced. But, with no indication that rising prices are being driven by rising borrowing, the Frankfurt-based Bundesbank refuses to talk of a property bubble.

That is cold comfort to ordinary Germany buyers who, like those in Ireland, complain that housing supply is far behind demand. And, as in Ireland, housing experts complain that little or nothing is being built at the affordable end of the market.

Despite the upswing in its property market, Germany remains an outlier in Europe, with 47 per cent of people living in rental accommodation – far beyond the EU average of 30 per cent. But here too, the last few years have brought dramatic changes, with tenants’ associations and researchers warning that the era of stable rents is over.

According to property research group F+B, new rents in Germany have risen almost 17 per cent in the last decade. In Berlin, rent on an 80sq m (860sq ft) apartment has jumped 40 per cent since 2006; in Munich the increase is 21 per cent.

A new study by Humboldt University in Berlin this week found that, in Germany’s big cities, over a million households are now paying more than half their income on rent, while 1.3 million live on less than the welfare minimum after rent.

According to census data of 77 cities, examined by Humboldt researchers, some 5.6 million German households – one in four of the total – now pay rent beyond the rule of thumb measure of 30 per cent of income.

The report’s dramatic conclusion: decades of efforts in Germany to ensure social cohesion “have dissolved”, with the housing market “not just a mirror of existing inequality but a contributor to growing inequality through rising rental costs”.

The rising cost of housing has been a hot button issue in the federal election, particularly the failure of the so-called “rental brake”. On paper, it banned landlords from charging new tenants a rent more than 10 per cent above the local benchmark. But the legislation was so full of loopholes, tenants’ associations complain, that it has had the opposite effect and has increased prices.

This week, in a first instance ruling, a state court in Berlin threw out the rental brake legislation as unconstitutional.

The housing crisis has dented Merkel’s election platform – that Germans have never had it so good. Spotting a rare weak spot in her political armour, centre-left parties have promised voters tougher state intervention and more social housing to ease pressures.

Back in Berlin, Ann Cannon says her firm has responded to the changing market, as Cannon & Cannon’s 15 buildings begin to take shape across an area not much smaller than the Croke Park pitch where Mayo lost again last Sunday.

The architects have replanned apartment layouts, she says, with 85 per cent of the development now smaller, two-room units. Managed by Berlin property veteran Anne Riney, she says sales are brisk.

Prices start at around €250,000, almost eight times the average German gross salary of €33,000. A new Berlin rule from February 2017, calling for 30 per cent rent-controlled social housing in new developments, did not apply when the development got the green light.

“Like any business,” says Ann Cannon, “things have to add up.”

1 What is Covid Tracker Ireland? The HSE’s new app explained
2 British holiday home rental company exits Irish market
3 Ireland’s economy forecast to shrink 8.5% due to Covid-19 pandemic
4 Will family’s tax debt stop me getting my inheritance?
5 Why gift a son now if it eats into his tax-free inheritance threshold?
6 How to save money while helping to save the planet
7 TikTok to quit Hong Kong mobile market ‘within days’
8 Finance union pushes for post-lockdown rules on home working
9 Poverty could afflict more than one-in-five children in State by year end
10 Can we finally say farewell to the scourge of hot-desking?
Real news has value SUBSCRIBE