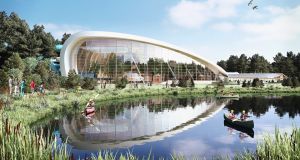 John Sisk & Son, which won the contracts to build the accommodation and central buildings at the first Center Parcs in Ireland (above), retained its position as the largest contractor, with revenues of just under €1.2 billion

The combined turnover for Ireland’s top 50 construction contractors increased by 25 per cent to €8.39 billion last year, according to the latest industry ranking.

Figures in the Construction Industry Federation (CIF) Top 50 Contractors list show that John Sisk & Son retained its position as the largest contractor, with revenues of just under €1.2 billion, up from €950 million in 2017.

Mercury Engineering retained second spot with turnover of €770 million, up 28 per cent, and Bam Ireland – which was caught up in the controversy about rising costs to deliver the National Children’s Hospital – once again third with €546 million, up from €470 million a year earlier.

Jones Engineering was fourth with income of €480 million, with Bennett (Construction) Ltd fifth on €405 million.

The rise in turnover in recent years reflects the strong recovery in the Irish construction sector following the crash of the property sector here a decade ago.

Dublin has about 24 per cent of the entire EU’s data centre market, just one percentage point behind London

“To put this in context, the volume of investment in the industry in 2018 was to the value of €26 billion,” said Tom Parlon, director-general of the Construction Industry Federation.

Mr Parlon noted that Irish construction companies internationalised during the recession as the domestic economy collapsed.

“A key driver of export growth is our expertise in data centre construction. Dublin has about 24 per cent of the entire EU’s data centre market, just one percentage point behind London. Our expertise in this area, and in mechanical and electrical and civil engineering, for example, is recognised globally.”

He said the CIF would be working with Enterprise Ireland in the coming year to develop an export-driven growth strategy for the industry.

“Expanding into foreign markets is a key step to reducing the boom/bust volatility the industry has been a victim of in the past.”

Mr Parlon said that in spite of strong growth in turnover across the industry, margins were “still very tight”.

“Operating margins are too low across the sector and this has seen a spate of companies going into administration and liquidation, as companies dependent on public sector work are pincered between fixed-price contracts and an environment of rising labour and materials costs.”