Competition for Poolbeg site increases as Glenveagh hints at interest 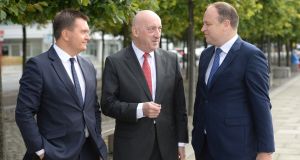 Homebuilder Glenveagh Properties could join the race to develop the Poolbeg site in Dublin, which has planning for 3,500 homes.

Speaking after the group’s annual general meeting in Dublin on Friday, chief executive Justin Bickle indicated that Glenveagh could bid to develop Poolbeg, a large portion of which is controlled by the National Asset Management Agency (Nama). Nama intends to finance the development of its interest and will shortly begin seeking partners to build on the south Dublin site.

Before the meeting Glenveagh said it had paid €24 million in total for two plots of land, in Howth Co Dublin and Bray, Co Wicklow, with space for 375 homes in total.

In relation to Poolbeg, Mr Bickle said that as Glenveagh was one of just two stock exchange-listed house builders in the Republic, the site was “something we ought to look at”. He said the company knew from newspaper reports that Nama would begin recruiting development partners shortly. “We do not know what the structure will entail,” he added.

Glenveagh is the second company to express interest in Poolbeg. Earlier this week, Steve Bowcott, chief executive of Sisk, said the construction and engineering group could bid with a partner.

Poolbeg is one of the biggest single plots zoned for housing in the Republic. An Bord Pleanála recently approved plans for it involving 3,500 homes, including more than 350 social and affordable dwellings, offices and shops.

Dublin- and London-listed Glenveagh builds homes for private buyers and investors but has some schemes of bigger houses and apartments. It is now working on 16 sites.

It announced the Howth and Bray deals in a statement that described the company’s performance so far this year as in line with expectations.

Mr Bickle indicated that Glenveagh would buy more sites, as it had cash left from the capital it has raised.

One shareholder at the agm criticised the fact that Mr Bickle, as well as chief operating officer Stephen Garvey and chairman John Mulcahy, shared bonuses totalling €500,500 while also benefiting from a founder share scheme that earned them almost €22 million in total last year.

Richard Cherry, chairman of the board’s remuneration committee, argued that the company had to strike a balance between the founder shares and executives’ pay. “We feel that the structure of salary and bonus is appropriate,” he said.

Glenveagh has sold, signed contracts for or reserved most of the 725 homes it intends building this year, except for 90 apartments in Dundrum in south Dublin.

The company hopes to sell these to a single investor who is likely to rent them out.