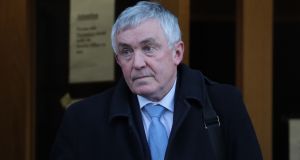 The Court of Appeal has dismissed a challenge by Patrick Cox and others against a ruling that they cannot get access to documents held by companies linked to developer Michael O’Flynn that have taken legal action against them.

Several O’Flynn group companies are suing former employees Patrick Cox, Liam Foley, Eoghan Kearney and others saying they made a €12.5 million profit on a student accommodation block on Gardiner Street, Dublin, at the business’s expense.

The defendants deny the allegations and among other points, challenge claims that they worked for several of the companies taking the case against them.

The Court of Appeal this week dismissed a challenge brought by Mr Cox and the other defendants against a ruling by the High Court that they could not get access to documents dealing with the sale of land in Birmingham and Coventry in the UK by an O’Flynn company, Victoria Hall Ltd, in 2012.

Ms Justice Úna Ní Raifeartaigh’s ruling means that the defendants cannot get documents they sought from the plaintiffs to support part of their defence against the allegations made by Victoria Hall and other O’Flynn companies.

The High Court ruled last October that the defendants could not get this particular set of documents. They appealed this, but the trial itself began in the High Court in January. It has been adjourned until June at the earliest.

Mr Cox and the others maintain that the documents show that the O’Flynn group did not inform the National Asset Management Agency (Nama) about aspects of Victoria Hall’s sale of the Birmingham and Coventry sites to British developer JJ Gallagher.

Mr O’Flynn has dismissed this suggestion in court and stressed that his businesses kept the agency informed at all times. The group owed Nama about €1.8 billion at the time while the State body requested that Victoria Hall sell the sites.

Justice Ní Raifeartaigh, with Ms Justice Ann Power and Ms Justice Caroline Costello agreeing, said the appeal came down simply to a late application for discovery of the documents.

She argued that the defendants understood the material’s relevance as far back as December 2016, when both sides were going through the initial stages of the legal action. Her ruling also noted that the appeal was a late attempt to obtain the documents where a previous refusal was not appealed.

Justice Ní Raifeartaigh said that the trial itself has already started and added that the courts “frown heavily” on late applications for discovery of documents, particularly when they are made while a trial is ongoing.