Coronavirus: High-profile building projects may soon grind to a halt 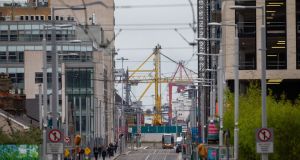 Industry sources suggest that multinationals with construction projects under way in the Republic could halt this work as they react to the Covid-19 pandemic. Photograph: Tom Honan for The Irish Times

Multinationals could halt building in the Republic, sources suggested on Wednesday, as work continued on high-profile projects such as the National Children’s Hospital and Grangegorman university site.

The Government is allowing work to continue on building sites around the Republic, which employ 30,000 people, despite some unions arguing the industry should close along with others to protect workers from Covid-19 infection.

However, industry sources suggest that multinationals with construction projects under way in the Republic could halt this work as these businesses react to the pandemic.

Tech giant Facebook earlier this week confirmed that it would temporarily suspend building at its data centre in Clonee, Dublin, in what it said was a move designed to protect workers’ health.

No other multinational has yet signalled an intention to halt the construction of new facilities in the Republic.

Work is under way in central Dublin on offices destined for search engine Google. Micro-chip maker Intel is adding a new factory at its complex in Leixlip, Co Kildare. Various pharmaceutical manufacturers are expanding their plants here.

Industry figures pointed out that a continued surge in Covid-19 cases could prompt multinationals to suspend building here and abroad.

Building is continuing on taxpayer-funded developments, including the €2 billion National Children’s Hospital in Dublin, where the main contractor is Dutch-owned BAM Ireland, which did not comment yesterday.

Similarly, work continued at the €220 million Technological University Campus at Grangegorman, Dublin, where the Republic’s biggest builder, Sisk, is the main contractor.

Sisk said it was open and working on all its sites. The company added that it was taking extra precautions to protect workers.

Sisk is working on the redevelopment of Pearse Station in Dublin for Irish Rail, building homes in Cherrywood, also in the capital, and offices and student apartments at Bonham Quay, Galway, among other projects.

Stock market-listed housebuilder Cairn Homes confirmed on Wednesday that construction was continuing on the 16 sites in the greater Dublin area where it was working.

While its listed rival Glenveagh Properties did not issue a statement, it is understood that building is continuing on its sites. That company too is working at 16 different locations.

Following Taoiseach Leo Varadkar’s announcement of extra measures to combat the spread of Covid-19, trade union Unite argued that construction should halt as it was impossible to take precautions such as social distancing on building sites.

However, Siptu said that it favoured working with building companies to ensure that they did whatever was necessary to protect workers.

The Construction Industry Federation (CIF) earlier this week said that clients such as State bodies should extend deadlines to allow building contractors time to take steps to protect workers on sites.

The federation, which represents the Republic’s building contractors, and the Irish Congress of Trade Unions, issued a joint statement urging builders to follow advice from the Health Services Executive (HSE) on protecting workers from Covid-19.