Work on big projects and house-building has stalled due to Covid-19, hitting up to 30,000 jobs 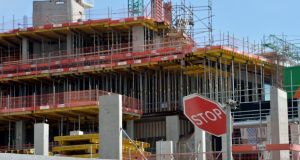 Construction has stopped on the national children’s hospital in Dublin due to coronavirus restrictions. Photograph: Alan Betson

Building contractors could end up in complex disputes with clients following the suspension of most construction across the State as a result of Covid-19.

Work on big projects – including the national children’s hospital, Grangegorman Technological University Campus, new roads such as the Macroom-Ballyvourney route in Co Cork – and house-building stalled across the Republic last month, hitting up to 30,000 jobs.

Joseph McCaffrey, director of quantity surveyors Duke McCaffrey, said at the weekend that the delay resulting from the Government ban on all but essential construction could create difficulties for builders and their customers.

“We would foresee a lot of contractual disputes on the horizon,” Mr McCaffrey warned.

Building contracts set deadlines for the work to be completed, and many impose financial penalties for delays. The terms generally include exceptions to this, including force majeure, that is where circumstances beyond the parties’ control make it impossible to fulfil an agreement’s terms.

Solicitor Fiona O’Neill, consultant in construction law with Dillon Eustace, said that builders and their clients should look at their contracts’ terms, including how the agreement defines force majeure.“See what the contract says,” she said.

Ms O’Neill noted that a lot of agreements allow builders to apply for an extension of time.

However, she warned that the Covid-19 outbreak and subsequent suspension of work were so unusual that an agreement’s definition of force majeure may not cover it. “A lot of contracts have not been drawn up with this in mind.”

Mr McCaffrey noted that builders working on State-funded projects were particularly fearful of the fallout from the coronavirus suspension.

He explained that Government contracts had strict terms, and even though the State itself had suspended work builders were still concerned that they could end up facing penalties or other problems as a result.

Builders seeking extensions of time have to formally notify the client. Mr McCaffrey said that it would be “very helpful” if the Government issued clear guidelines to construction companies on how to go about notifying it.

Ms O’Neill suggested that disputes between builders and clients arising from the Covid-19 lockdown could be mediated.

Taoiseach Leo Varadkar included “non-essential” construction in extra measures designed to halt the spread of coronavirus that he announced in the last week of March. That forced most building to halt across the Republic, barring work classed as vital, which included the repair and maintenance of roads and motorways.

Work on extending the National Rehabilitation Hospital in Dún Laoghaire, which was almost finished, was allowed to continue until the project was completed.

Recent figures show that building has collapsed at a record pace to its lowest level since the recession almost wiped the industry out 11 years ago.

Construction and property sources last week said that banks were not discussing funding new projects, and were unlikely to do so for several months after the crisis has passed.