Abbey concerned by level of state intervention in housing market 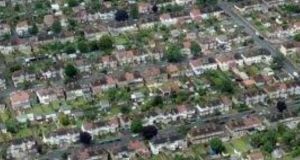 Abbey reported pre-tax profits of €16.99 million for the six months to the end of October

House builder Abbey has warned that state intervention in the Irish and British housing markets has the potential to “crowd out” private investors.

In a trading update, the company noted with concern the announcement this week by the UK government that it intends to speculatively develop land for housing.

“When set alongside similar activities by Government agencies in Ireland, this raises fundamental questions about the future environment for private development in both jurisdictions,” Abbey said.

“Publicly supported UK Housing Associations already speculatively develop houses for sale. This week’s announcement will serve to further crowd out at the margin the role of private capital in housebuilding,” it added.

In the budget, the Irish Government announced ambitious plans to spend €3.8 billion on building and refurbishing 35,000 social housing units over the next five years.

The Government and the Economic and Social Research Institute (ESRI) believe 25,000 new housing units need to be built every year to meet the current level of demand.

The builder said strong margins were a “notable feature” of the period and should be sustained into the next half year.

While forward sales were also encouraging, it said pressure on costs continued to be a feature of the market.

Its housebuilding division completed 225 sales in the six month-period - 205 in the UK, 15 in Ireland and five in the Czech Republic.

In Ireland, Abbey’s project in Rathfarnham is now 90 per cent sold and the company said it was turning its attention to its project in Lucan, which is scheduled to launch early next year.

Trading in the UK was good throughout the period, the company said.

In Prague sales completed in the period were disappointing, however, as last year a brighter second six months is in prospect, it said.

Overall further progress in all regions can be expected in the second half, it said, noting that during the period 405 plots were added to its land bank.

Abbey’s board announced a dividend of five cents per share, which together with the six cents approved at its AGM in October will make a total of 11 cents for the financial year.