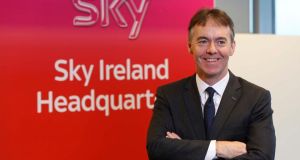 Sky will invest €1.25 billion in Ireland over the next five years, the company’s chief executive Jeremy Darroch said tonight.

Giving the keynote speech at an Institute of Directors dinner in the Burlington Hotel, which included some of the leading names in Irish television and film, Mr Darroch acknowledged that Sky had been slow to establish a substantial on-the-ground operation in Ireland.

He did not give specifics as to where the company would be investing the money, but he said it would include Irish-produced dramas.

He told the audience that Sky was “blown away” by the reaction to Chris O’Dowd’s Moone Boy, which has been commissioned for a third series. The broadcaster has also financed the John Meade Falkner pirate novel Moonfleet which will be a two part series for Sky and was shot in Ireland.

Sky is a co-partner with HBO on the successful Game of Thrones which is shot in Northern Ireland.

“It is early days but we hope that these will be the start of a long line of successful Irish shows that Sky will be involved with,” he said.

Sky has greater penetration in Ireland with 70 per cent of households in Ireland receiving its channels compared to 60 per cent in its home market of the UK.

Mr Darroch said people were right to ask why it took Sky so long to open a hub for its Irish operations in Dublin given that the company has been in Ireland for 20 years.

He acknowledged that it was “no longer tenable” for Sky to run its Irish operations from the UK which is why it launched its hub in Dublin with 800 jobs earlier this year.

“The desire to get closer to our customers was one of the key drivers behind our decision to open our brand new business hub here in Dublin,” he said.

“We need to raise our game if we are to achieve our ambitions here in Ireland. And having a dedicated operation on the ground is an important part of that.”

Film directors Neil Jordan, Jim Sheridan and Lemmy Abrahamson, actors Stephen Rea and Angeline Ball and James Bond producer Barbara Broccoli were among those attending the dinner for the audiovisual industry this evening.

The IOD, which is the representative body for directors and senior executives within the private and public sectors, organised the event in conjunction with the Irish Film Board to promote the Irish audiovisual industry to investors including venture capitalists from abroad.

The industry has continued to thrive despite the recession, much of it driven by outside investment from overseas productions, and is now estimated to be worth €550 million a year.

IOD chief executive Maura Quinn said the institute was acting as a facilitator for tonight’s event which she hoped would make the industry more successful.

“We felt there was huge economic potential within the audiovisual industry within Ireland, but a lot of the focus historically has been on award ceremonies,” she said.

“There is a need to pull the entire industry together and we see ourselves as a convening party. We tend, otherwise, to operate in silos. This is a serious business with a huge annual turnover.” .

Ms Quinn said she had consulted with the likes of Liam Neeson, Stephen Rea, director John Moore and producer Morgan O’Sullivan before putting the event together.

“There was support for the whole idea. We will have a lot of hugely successful and very influential business people in the room. We want investors to look at the industry in a holistic way,” she said.

The Irish Film Board has brought many of the interested parties together. Its chief executive James Hickey said tonight’s event amounted to a “real opportunity to continue to grow and attract investment into the economy”.