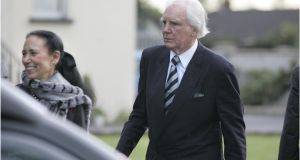 BUSINESSMAN Sir Anthony O’Reilly has failed to overturn a High Court order requiring him to provide additional information to AIB Bank about his assets.

A three-judge Court of Appeal on Tuesday unanimously dismissed Sir Anthony’s bid to overturn the additional disclosure order, made last June as part of AIB’s efforts to execute a judgment for around €22.5 million obtained against him last year.

His total indebtedness to AIB now stands at around €15 million.

Ms Justice Mary Finlay Geoghegan, on behalf of the appeal court, said it had been open to AIB to seek to cross-examine Sir Anthony about his assets once its judgment was obtained. The bank did not seek to do that straight away because of Sir Anthony’s health. He had undergone major back surgery earlier this year in New York and was on round-the-clock painkillers, the court heard.

The bank was later dissatisfied with the nature of the information he had provided in relation to his assets, Ms Justice Finlay Geoghegan said.

She said the High Court order was correct and the Court of Appeal would give Sir Anthony until November 3rd to provide the discovery of documents sought by the bank.

Bernard Dunleavy SC, for the businessman, asked for six weeks to provide the information because of his 79-year-old client’s continuing health position which, the court heard, remains unchanged.

AIB objected to six weeks as it would mean the information would only be available at the same time as a court hearing is due to take place in the Bahamas, where Sir Anthony is resident, in relation to a personal insolvency process he has engaged in there.

Mr Justice Sean Ryan, presiding at the appeal court, said Sir Anthony could have four weeks given he must have known there was a possibility the appeal would fail.

In that appeal, it was argued AIB has been advised that Sir Anthony had €13.5 million in unencumbered assets which the bank could move against to satisfy the outstanding debt but which it failed to do.

AIB denied that and other claims its application was part of a collateral attempt to embarrass him. Seeking further information was a normal part of the judgment process, it said.