Seen and heard over the weekend

New company is to take over Dublin’s Clarence Hotel 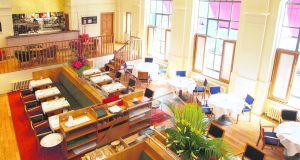 The Tea Room at the Clarence Hotel. A new ownership structure sees the hotel business split between Bono, the Edge and property investor Paddy McKillen

Property developer John Ronan plans to open a 16-bedroom guesthouse on Grafton Street in Dublin. Mr Ronan is seeking permission to revamp No 70, which is close to the five-star Westbury Hotel and is currently home to a Permanent TSB, according to the Sunday Times.

The paper also reports that under a restructuring and refinancing deal for Dublin’s Clarence Hotel, a new company, Keywell, is to take over the hotel. It was previously owned by a partnership between Bono and the Edge from U2, property investor Paddy McKillen and financier Derek Quinlan. The new ownership structure sees the business split between Bono, the Edge and McKillen, each getting one third of Keywell.

The Dublin Airport Authority is to start paying the State a dividend again, the first time since the start of the recession. The Sunday Independent writes that it is not yet clear how much the payment, expected this year, will be.

Staying in the aviation world, Stobart Air is the target of a takeover by Aviation Finance Company. The Sunday Times reports the airline, formerly Aer Arann, is in exclusive talks with AFC. The finance firm was set up in 2012 to invest in the airline industry, and the paper reports that any deal is expected to involve a takeover of both the airline’s operating company and a related leasing company which owns its aircraft.

Stobart Air’s main shareholders include the London-quoted logistics company Stobart Group with a 45 per cent stake, Invesco with 40 per cent, Cenkos Securities with 10 per cent, and Aer Arann founder Padraig Ó Ceidigh with 5 per cent.

Irish IT firm Intercom expects to outgrow its current office in the former home of Anglo Irish Bank on St Stephen’s Green, Dublin, within the next 12 months. Speaking to the Sunday Business Post, Paul Adams, vice-president of product at the IT firm, said it is hoping to hire 60 more people in Dublin. It currently employs 100 here.

Troubled oil and gas explorer Petroceltic is expected to announce it has been granted another two weeks to complete a deal to pay off its lenders. The Sunday Independent reports that the firm has received another waiver on bank repayments from lenders.

The owners of BHS stores in Britain are planning a radical overhaul of its business, according to the Sunday Telegraph, with store closures, job losses and a restructuring of its pension scheme.

The company, with 175 stores, lost £85 million before tax last year after Sir Philip Green sold the fashion and homeware chain to a little-known consortium called Retail Acquisitions for £1.