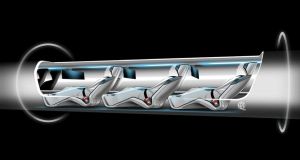 Image of the week: Hyperloop
Billionaire PayPal founder Elon Musk has unveiled plans for Hyperloop – a transport system that would allow passengers to travel faster than the speed of sound. The Hyperloop system could enable passengers to travel the 611km between San Francisco and Los Angeles in just 30 minutes, by shooting them through low-pressure tubes.
PHOTOGRAPH: TESLA MOTORS/AP

In numbers: Blackberry
5,000
BlackBerry may have eliminated 5,000 jobs in fiscal 2013, but the smartphone vendor wasn’t done. In July, it laid off 250 more employees including its VP of service operations and senior vice-president of global manufacturing. And following its annual general meeting on July 9th, the company fired its managing director for the US, Richard Piasentin.

$5.3bn
In October 2007, wireless technology giant Alcatel-Lucent announced an agreement to distribute BlackBerry smartphones in China. Shares in BlackBerry’s parent company Research in Motion surged, making it the most valuable company in Canada based on market capitalisation. The company’s fate seemed to be decided two years ago though after its market value plummeted by $65 billion (€49 billion). It took losing another $13 billion for the board to put the company up for sale. At this week’s share price, its market capitalisation amounts to about $5.3 billion.

$84m
The amount the former global leader in smartphone technologies lost in the three months to the end of June. While better than the $518 million loss for the same period last year, it was far worse than expected.

The lexicon: PadFone
Companies such as HTC, LG, Sony and Nokia are increasingly combining mobile phones and tablets to create single do-it-all computing devices, with an inelegant lexicon of hybrid names to match. Phablets and fonepads are typically hybrids of smartphones and tablets with a screen size of five to seven inches. A PadFone on the other hand is a phone than can be plugged into a larger screen to become a tablet.

Getting to know: Martin Aircraft
The recent Dublin Bus strike which saw bus services across the city come to a standstill may have hampered your day, forced you to work from home, or horror of horrors, fork out for a taxi to work. But fear not, the jetpack could soon be on sale to the public, after getting the go-ahead from aviation authorities to begin manned test flights.

He said a specialised version of the jetpack designed for the military and first-responder emergency crews should be ready for delivery by mid-2014, while a simpler model aimed at the general public is expected to be on the marketin 2015.

The company has already received more than 10,000 enquiries from people keen to take to the skies.

The list: Ryanair’s appetite for lawsuits
Ryanair’s chief executive Michael O’Leary this week refuted passenger safety allegations made by some pilots on a Channel 4 Dispatches programme. The documentary, called Secrets from the Cockpit, featured anonymous Ryanair pilots claiming the airline’s fuel policies put passengers at risk. Insisting there are no safety concerns in Ryanair, O’Leary said he plans to sue the station. It’s not the first he has threatened legal action.

1 Aer Lingus: Last year, O’Leary said he planned to sue Aer Lingus to prevent it from adding additional pension contributions without the approval of shareholders. In an open letter to shareholders, he staunchly opposed the contribution of more than the 6.4 per cent that Aer Lingus currently contributes.

2 European Commission: In 2007, Ryanair threatened to sue the European Commission for its failure to take action on a number of state aid complaints involving Air France, Lufthansa, Alitalia and Olympic Airways. The low-fares airline said the national carriers were being propped up by their
governments.

4 UK Government: In 2006, Ryanair threatened to sue the UK government for £3.3 million for losses it says it incurred because of tighter aviation security.