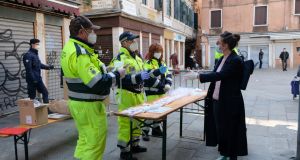 Municipal workers distribute masks and gloves at the Rialto market in Venice on Saturday, as new restrictions for open-air markets were implemented by the Veneto region to prevent the spread of coronavirus. Photograph: Manuel Silvestri/Reuters

When, at the end of February, Lombardy and Veneto recorded Italy’s first local cases of transmission of coronavirus, the two regions quickly erected road blocks, establishing Europe’s first lockdown and a precedent for the rest of the continent.

Since then the fortunes of the two wealthy neighbours, which have some of the best-resourced health systems in Europe, have diverged.

Struck by a human catastrophe unseen in Europe outside of war, with military trucks taking away corpses from the city of Bergamo, Lombardy has a death rate of 17.6 per cent.

Nearby Veneto’s stands at 5.6 per cent. While virologists caution that the percentage death rate is closely tied to the level of testing, they also attribute the gap to other factors, such as Veneto’s reluctance to hospitalise compared with its neighbour.

“Veneto has a very low mortality compared to the rest of Italy, ” said Prof Andrea Crisanti, a leading virologist from the University of Padua, in charge of a mass testing programme across Veneto. “This shows that our approach has worked well so far.”

Higher levels of testing and tracing in Veneto is the most widely cited explanation for why the region has managed to control its outbreak more effectively than its neighbours.

Luca Zaia, governor of Veneto, was the first regional head in Italy to devise a widespread testing programme that involves drive-through swabs done in cars as well as tests in medical centres.

They acted in contradiction of World Health Organisation guidance, which advises only to test the suspected cases. On the advice of the region’s scientists, Veneto has to date conducted 133,289 tests as of Saturday, the second-highest in Italy after the 141,877 of Lombardy in spite of having half of its population.

Yet experts say testing is not the only reason for the lower death rate.

Venetian doctors also cite the region’s expertise in infectious disease, something they trace back to its pioneering history dealing with viruses arriving in its port from the east. The word quarantine derives from quarantena, the Venetian word for “40 days”, or the amount of time ships arriving from plague-ridden destinations were isolated.

For Giorgio Palù, one of Europe’s leading virologists, and scientific adviser to the governor of Veneto, a critical factor has been the number of diagnosed patients taken into hospital.

The number of diagnosed patients who were taken in hospitals for clinical treatment at the start of the outbreak was about 65 per cent in Lombardy, Prof Palù said.

This compares with 20 per cent in Veneto, where the majority were told to stay at home unless urgent care was required.

“There were different instructions given to the sick by the different regional health authorities,” he said. “Yes, there has been more testing in Veneto but people were kept at home and not taken into hospitals. The more patients you admit to the hospital, the more cases you get. You create the outbreak as at the start nobody was taking care of sampling the doctors or nurses, [so] you were taking home the infection.”

His observation comes as more than 60 Italian doctors and health workers have died, the majority of these in Lombardy. A group of doctors from the Papa Giovanni XXIII hospital in Bergamo warned last month that hospitals had become the main source of transmission of Covid-19 infections, and called for more patients to be treated at home.

“We are learning that hospitals might be the main Covid-19 carriers,” they wrote in the New England Journal of Medicine. “They are rapidly populated by infected patients, facilitating transmission to uninfected patients.”

The Veneto region has a large network of smaller health centres, which have been used to diagnose and treat patients in ways that have kept them out of large hospitals, said Prof Palù.

The fact that Lombardy has a greater proportion of private hospitals than Veneto also contributed to more Covid-19 patients ending up in hospitals, he argued. The Lombardy administration was also under political pressure, Prof Palù added.

“In Lombardy there were too many admissions from the primary side, where the triage was done. The Italian prime minister at the start criticised the hospitals in Lombardy, and it seems they responded by wanting to show they were treating people, not telling them to stay at home.”

Officials in Lombardy also said Rome should have done more. “I put my mask on on the television, and they insulted me and told me that I undermined Italy’s credibility,” said Lombardy’s governor Attilio Fontana this week. “Perhaps I should have been tougher in opposing the [central] government.” Late last month, Lombardy established teams of medics to monitor at-home patients who had been discharged from hospital.

The mood in both regions is still sombre. “Have we committed errors? Of course we have,” said Giulio Gallera, Lombardy’s head of welfare last week. “We have always given our best to offer the many people who arrived in our hospitals the necessary care ... we have done the best we could.” – Copyright The Financial Times Limited 2020