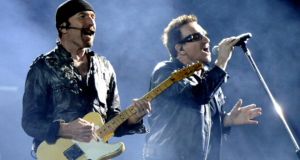 Few guitar makers can claim the same perch in the rock music pantheon as Fender, whose Stratocasters and Telecasters have been favoured by musicians as diverse as Jimi Hendrix and Kurt Cobain.

Now Fender, in the middle of a revival and expansion effort, is turning to two prominent musicians for help.

The company plans today to name Bono and the Edge from U2 to its board, both brought in by Fender’s majority owner, TPG Growth. Their challenge is to help Fender, which is 68 years old, thrive in a digital age, when Spotify is a more prominent music brand than the Strat.

“I believe that guitars are here to stay and, far from digital technology being their death knell, I think it throws up some new ways to power creativity and give people greater access to the huge potential of the electric guitar,” the Edge wrote in an email from the studio where the band is recording its next album.

It is the latest twist for a company that helped give birth to the modern electric guitar, when Leo Fender fashioned a solid-body instrument that could be mass produced easily. The design gave rise to the Telecaster, the choice of Bruce Springsteen, and then to the world-famous Strat, the beloved instrument of Eric Clapton, Stevie Ray Vaughan and the Edge and his famously minimalist playing style.

In his email, the Edge — who was born David Evans — noted that some of U2’s most popular songs, including “Sunday Bloody Sunday” and “Pride (In the Name of Love),” were recorded using Strats and Telecasters.

Two years ago, Fender sought to become a publicly listed company, hoping to raise as much as $160.5 million. But the stock sale’s prospectus revealed some signs of struggle under the guitar maker’s owner at the time, the investment firm Western Presidio. Among them were lukewarm financial results, with an $11.8 million loss for the three months that ended April 1st, 2012, a reversal from a $6.5 million profit in the period a year earlier.

Early in 2013, Mark Fukunaga, one of the company’s longtime investors, sought a new partner to help turn around the brand. He eventually chose TPG Growth, the middle-market arm of the investment giant TPG, in part for the firm’s experience in consumer and digital companies.

“It’s an important brand and an important part of the nation’s culture,” William E. McGlashan Jr., TPG Growth’s founder and managing partner, said in an interview. “Our history in consumer, our history in media and understanding both industries led Mark to believe we were the right partner to take this company to the next level.”

Since taking over as majority owner, the firm has moved to shore up Fender’s finances and operations. Upgrading poorly maintained areas for storing wood used in the guitars and streamlining the manufacturing process to shorten a three-year waiting list for custom-built models were among the most pressing priorities, Mr. McGlashan said. So, too, was refinancing.

Beginning several weeks ago, Mr McGlashan reached out to Bono through a mutual friend, and the U2 frontman in turn asked his longtime friend to join him in the enterprise. While Bono has had a history as an investor, including as a co-founder of Elevation Partners, the Edge had comparatively less experience. But after meeting with Fender’s owners and then touring the company’s factory in Corona, Calif., he signed on.

“It was the combination of time-honored traditions of guitar production with some very fresh ideas about what the company can do going into the future that hooked me,” the Edge wrote.

The U2 stars bring different qualities to Fender, Mr McGlashan said. Bono brings a gut understanding of whether a brand is working, while the Edge can guide the company in innovating both its instruments and in helping to educate consumers.

TPG Growth stayed largely quiet on what lies ahead for Fender, though its future appears to revolve around both an expansion of its brand and new digital initiatives.

The idea is not to slap Fender’s famous cursive logo on an array of T-shirts and coffee mugs. But the company could move beyond guitar amplifiers into speakers, headphones and other sound systems, as the amplifier maker Marshall has started to do.

Digital education is another attractive business opportunity. The company already makes a guitar that can plug into a computer; a natural next step could be online guitar education.

The addition of the U2 members won’t change one thing, the Edge said: He will still use equipment from other companies, including an array of Gibson and Gretsch guitars and Vox amps.

“I’ll continue to use my favorite guitars and amps and effects units made by other companies,” he wrote. “I’m sure I always will, but I’m excited about what new instruments and hardware I can help create with Fender.”