An Post gender pay gap is 3.7% in favour of men, company says 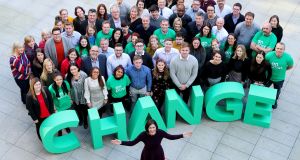 An Post has calculated that its gender pay gap in favour of men is 3.7 per cent. The semi-State company said its result was “better than most” but accepted it still needed to recruit more women, especially at management level.

The company will today release its first gender pay gap report and action plan, which calculates the difference between average pay for women and men. An Post’s 3.7 per cent result compares with an average in Ireland of 13.9 per cent, while the pay gap is about 16 per cent across the European Union.

“[But] we recognise we can do more to close our gap,” said An Post. The company says it is embarking on a “culture review” to identify where it can improve.

The company attributed most of the blame for its 3.7 per cent mean average discrepancy between the pay of men and women to a strong gender imbalance at management level. The gender gap on bonus payouts at An Post is also 8.5 per cent.

The organisation acknowledged it had “far more men in management roles”, with males comprising more than two-thirds of its senior management team. Overall, 75 per cent of An Post staff across the group are men, while women make up less than a third of its board of directors.

“Moving from the old world to the new, we need an equal and inclusive culture to support our business, so we’re embarking on a company-wide culture review,” said Eleanor Nash, the company’s chief people officer.

“Our priorities are to remove the bias from all recruitment processes, identify and remove any barriers to promotion and provide career progression opportunities for everyone.”

An Post has committed to measures such as 50-50 gender split shortlists for all recruitment. It will also submit all job specifications for bias assessment, while women will be encouraged more to apply for internal promotion.

Despite the remaining challenges, An Post insisted it had made progress in recent years, such as at its eight-member management board, which was all-male as recently as three years ago but now has a 50-50 gender split. It also now recruits for its graduate training scheme on an equal gender split.

It is also a supporter of the Irish Management Institute’s 30 per cent club cross-company mentoring programme, which aims to help more women into senior and board positions.

Chief executive David McRedmond said the aim was to make the company “an exemplar for equal opportunity”.

“Our gender pay gap is better than most organisations. [But] we are starting the conversation internally and externally,” he said. “We are eliminating bias in our communication and we are implementing an action plan company-wide.”