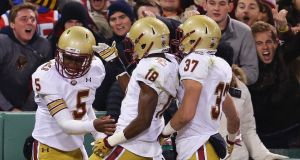 Most of us merely have lunch. Powerful business leaders have luncheons.

The Boston College Chief Executives Club, a networking group that considers itself one of the leading speaking forums in the United States, announced at one of its invitation-only events on Tuesday that it will hold its inaugural Global Forum in Dublin next September, the day before a US college football match at the Aviva.

The forum will consist of a high-powered networking event of Irish and US business leaders. There will, of course, be a luncheon. And presumably some tay afterwards.

Tuesday’s event saw more than 300 members of the executives’ club pack into a ballroom at the Boston Harbor Hotel for a talk by Uber chief executive Travis Kalanick. They were also informed about the road trip to the old sod in 2016.

The forum is part of a wider series of events surrounding the Aer Lingus College Football Classic, which will pit Boston College against Georgia Tech. Neil Naughton, son of Glen Dimplex billionaire Martin, is on the steering committee. He told the executives’ club that it is about more than just a game.

“The people of Ireland know what’s trying to be achieved. They know it’s not just about a few hours of football on the turf – it’s everything that follows American football. They know there’s going to be a hard edge and business focus to it.”

The executives’ club also reckons a “principal purpose” of the game is for business leaders from Ireland and New England to network together: “a task made a little easier by the incentives Ireland offers”.

Sssshhh. Don’t say that too loudly in US election season.

Boston mayor Marty Walsh will be there, as well as Boston business leaders and presumably the great and the good of this country.

“Admittance will be by invitation only and will literally be the ticket that money can’t buy,” said Naughton.

1 Sean Quinn stunned at rebranding of Quinn Industrial Holdings
2 Probate is changing: What does that mean for you?
3 Three Ireland switches on 5G network around the country
4 Irish golf tourism faces ‘wipeout’ unless Covid travel restrictions eased
5 SR Technics sells design engineering business to Growing Aero
6 Am I paying too much for my buy-to-let mortgage?
7 Irishwoman Adrienne Gormley joins N26 as chief operating officer
8 U2 face closure of loophole they used to avoid paying their taxes
9 Should I switch bank now with Ulster Bank at risk of closing?
10 D’Arcy appointment will not blow over
Real news has value SUBSCRIBE