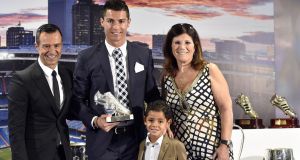 Michael Mullins, a former president of the Irish Taxation Institute (ITI), was this month appointed to the boards of Gestifute International, the main Dublin cog of Mr Mendes’s group.

He was also appointed as a director of Polaris Sports, another group company that was previously used as part of a tax management strategy for Gestifute clients such as the Juventus striker Cristiano Ronaldo.

Mr Mullins is a former partner at the Cork and Dublin-based firm Moore Stephens, one of the top 10 accounting firms in the State. The respected tax expert retired from the firm in recent years.

When he was a partner, Moore Stephens told its clients that Mr Mullins had “been involved in multimillion-euro negotiations with the Revenue Commissioners at the highest level”.

“His extensive network of contacts ensures that Michael can reach the right decision-maker on our clients’ behalf,” the firm has previously said.

Cork-based Mr Mullins served as president of the ITI for one year from 2000. In 2003, he was also appointed by former minister for finance Charlie McCreevy to sit on a high-powered committee that reviewed the powers of the Revenue Commissioners.

At Gestifute and Polaris, he will sit on the board alongside Luis Correia, a nephew of Mr Mendes, and Andy Quinn, a former managing partner of Moore Stephens who has acted as a financial adviser to the football agent for many years.

Mr Quinn previously helped to administer a controversial tax management arrangement, which was partially executed through Ireland and was used by several Gestifute clients, including Paris Saint-Germain winger Ángel Di María and Ronaldo.

The arrangement that was put in place by Gestifute was meant to avoid tax on the players’ image rights payments. It attracted the attention of Spanish tax authorities, however, when both men played for Real Madrid.

Both Di María and Ronaldo subsequently made tax settlements with Spanish authorities, in which the use of Polaris was cited.