Adventure resort is over the hump 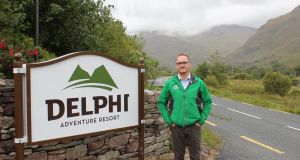 Douglas Whittaker: “Up to this year we were struggling to make ends meet but we will see profit for the first time since 2008.”

Delphi Adventure Resort and Spa, which is on 300 acres of forest in Leenane, Co Galway, was established to serve local kids looking for adventure. The business has grown since to accommodate more than 14,000 children each year from across Ireland and Britain.

Last year it rebranded to incorporate both the adventure and luxury side of the business, becoming Delphi Adventure Resort and Spa.

Established in March 1982, Delphi was funded by private investors in Mayo and Galway. The first owner was Frank Noon, the Mayo footballer. Current owner Tim Bohan took over about 15 years ago.

Bohan is the director of Seedling Investments, which owns Delphi and also owns the Avalon House and the Kinlay House hostels in Dublin.

Commercial director Douglas Whittaker is essentially resort director. He has worked for the company since last year having previously been with Mamaison Hotels and Residences.

Officially opening in April 2008, a 50-bedroom hotel and spa was built on the site operating under the brand Delphi Mountain Resort, the other brand being Delphi Adventure Company.

“When the recession kicked in, they found they didn’t have the local market and, as the UK market was experiencing the same level of recession, it really impacted on the numbers.”

In the summer Delphi is largely a family destination and the rest of the year, a large proportion of the business is based around the schools and corporate markets. The global adventure tourism market is estimated to be worth about €250 billion, something on which Delphi is keen to capitalise. Delphi has developed the Everest programme in partnership with Gerry Hussey, consultant to the Irish Boxing Federation.

“It’s proving very popular,” says Whittaker of the programme which is part of its corporate facilitation. “It uses the same kind of performance principles but brings them into the corporate marketplace.”

This aspect of the business is worth about 10 per cent of Delphi’s business but Whittaker says he can see it rising to about 25 per cent in the next couple of years. “Most companies are benefiting from the growing corporate and incentive tourism market by adding some kind of adventure element to their packages such as biking or kayaking but there are very few resorts that offer what we can which is accommodation ranging from very basic, affordable hostel accommodation [180 beds] to luxury two bedroom suites in a hotel,” says Whittaker. Activities offered include zip-lining, bog challenges, coasteering and yoga.

It has recently added fishing to the list of activities it offers having won the tender to manage the fishing license for Aasleagh Lodge and the Erriff Fishery. Whittaker says the established schools business allows the resort to offer such a wide variety of activities year round.

The business employs about 10 permanent staff. Staff numbers can rise to 90 in high season. “The idea is to make it as much as possible a year-round business where we can employ as many people as possible on a permanent basis and grow the customer loyalty and satisfaction,” says Whittaker.

Until 2014 Delphi had just one restaurant and it was felt the food offering wasn’t diverse enough to keep clients on-site for every night of their stay. Offering that diversity cost €1 million in investment, which came from a mix of private and loan funding.

“We brought on board Stefan Matz as executive head chef formerly of Ashford Castle and the G Hotel. This year we opened two new catering outlets alongside the 814 Brasserie, one the Chef’s Table by Stefan Matz, which is open to residents and non-residents, and also the Wild Atlantic Cafe.”

Research, investment and innovation has resulted in a turnaround for the resort.

“Up to this year we were struggling to make ends meet but we will see profit for the first time since 2008,” says Whittaker.

Last year the company grew 25 per cent in revenue terms across the whole business. “We’ve seen some significant growth. This year we will see a move into profitability and our three-year plan is to keep driving that forward.”

1 Belgium helps Ireland to a Brexit boon
2 If tourists are such pariahs should we not be testing them on arrival?
3 Varadkar and Donohoe to meet banks to discuss mortgage breaks
4 FC Barcelona to pursue Nike for compensation over defective shirts
5 Ireland faces 'deep downturn' this year and may not rebound until 2024 if there is a second wave
6 Indoor vertical farming is the future says Irish agritech start-up
7 Coronavirus: forgotten lessons of the Spanish flu pandemic
8 Will family’s tax debt stop me getting my inheritance?
9 When I’m 65: five ways you’ll benefit
10 The property developers who survived the crash
Real news has value SUBSCRIBE