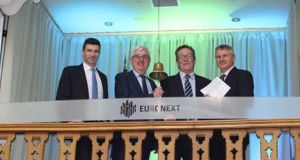 Yew Grove is primarily focused on office and industrial assets outside Dublin city.

Dublin-listed Yew Grove has acquired three properties in the IDA Business Park in Letterkenny, Co Donegal, for €16 million and said further acquisitions are in the pipeline.

The real-estate investment trust (reit), which raised €75 million through its June flotation, said it had deployed €76 million since its initial public offering (IPO) and had a further €16 million available to acquire further properties in the near term after agreeing a new three-year floating rate loan facility with AIB.

The Letterkenny deal represents a net initial yield of 8.35 per cent, after accounting for purchase costs.

The buildings are tenanted by Optum Operations (Ireland) Ltd under a 10-year lease with nine years of certain term remaining. The leases are guaranteed by Optum’s parent, the United Health Group, the largest healthcare business globally and one of the US’s largest corporations by revenue.

“The buildings have been finished to a very high quality and the recent refurbishment is a tangible sign of the tenant’s commitment to the site and the area, one of its largest operations outside of the US. Not only has Yew Grove acquired very high quality properties but the purchase gives the company a strong and secure income stream,” said the Reit’s Jonathan Laredo.

Yew Grove, which is chaired by former senior IDA executive Barry O’Dowd, is primarily focused on office and industrial assets outside Dublin city that are let to State entities, IDA-supported companies and large corporates.

The company on Friday announced a new loan facility for up to €19.9 million which is within the loan-to-value target of 25 per cent.

Taking account of the acquisitions now completed, together with confirmation of new banking facilities with AIB to support further acquisitions the company’s board on Friday reiterated its dividend guidance of 7c per share for the 2019 financial year based on the current share count.

“In the short period since IPO, Yew Grove has successfully deployed the capital raised and has a strong pipeline of potential acquisitions of well-tenanted, well-covenanted and high-yielding commercial real estate. The high-quality rental income stream positions us to pay a maiden dividend for 2018 and retain guidance for a significant dividend increase in 2019. We look forward to 2019 and the continued delivery against our stated objectives,” said Mr Laredo.

Pat Phelan’s Sisu chain raises additional funds as it eyes US launch 17:33
Siemens’ $18bn energy spin-off falls in Frankfurt debut 17:30
Stripe takes part in major fundraising rounds for Stedi, PayMongo 17:26
Am I paying too much for my buy-to-let mortgage? 17:09
Mortgage breaks will not be extended beyond this week 16:28

1 Former junior minister Michael D’Arcy did not contact ethics watchdog over new job
2 Three Ireland switches on 5G network around the country
3 Mortgage breaks will not be extended beyond this week
4 Pilita Clark: The looming legal minefield of working from home
5 Chris Johns: Boohoo exposed on pay and conditions in digital economy
6 Am I paying too much for my buy-to-let mortgage?
7 Should I switch bank now with Ulster Bank at risk of closing?
8 State should use Covid-19 impact on building costs to build homes
9 Johnson Hana raises €3.5m to fund US UK expansion
10 Stripe takes part in major fundraising rounds for Stedi, PayMongo
Real news has value SUBSCRIBE