Weighted average maturity of the group’s debt increases from 1.9 years to 5.7 years 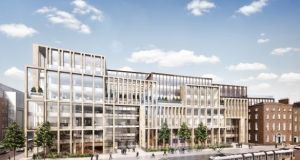 The new agreement consists of a €320 million unsecured revolving facility for a five-year term and a margin of 2 per cent over Euribor, as well as €75 million of unsecured US private placement notes.

The new credit facility agreement replaces a previous one that was repayable in November 2020 and had a margin of 2.05 per cent. Participants then were Bank of Ireland, Wells Fargo, Barclays Bank Ireland and AIB.

As a result of the refinancing the weighted average maturity of the group’s debt has increased from 1.9 years to 5.7 years. Hibernia’ s current net debt position is €210 million, it said.

“We are delighted to have agreed this refinancing which significantly extends the maturity of our debt and locks in longer term, low cost funding. In addition, our move to an unsecured debt structure, the first Irish Reit to do so, ensures we have access to the widest possible range of funding options in future,” said chief financial officer Tom Edwards-Moss.