Work to begin on 310-room budget hotel on Liffey Street 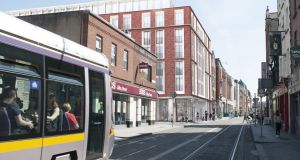 The hotel redevelopment of the site is expected to “transform this area, encouraging tourist footfall and general retail activity in the surrounding area”.

Fitzwilliam Real Estate Properties, the development company chaired by solicitor Noel Smyth, has lodged a commencement notice in respect of a €55 million hotel and retail development at the junction of Liffey Street and Middle Abbey Street in Dublin 1.

The company will soon begin construction on the 310-room hotel. When completed in mid-2020, the hotel will be operated by budget brand Motel One in its first venture into the Irish market. Motel One operates 66 hotels with more than 18,400 bedrooms across Europe, and Stefan Lenze, its head of development, says the Dublin offering will be “excellent quality, design and service at a fair price”.

Mr Smyth expects the redevelopment of the currently underutilised site to “transform this area, encouraging tourist footfall and general retail activity in the surrounding area”.

His company has committed substantial investment to the immediate vicinity, such as the Blue Building at 7-9 Henry Street, a new flagship store currently under construction for fashion chain Next. The site was formerly part of Arnotts department store.

So is another site with frontage onto Middle Abbey Street and Williams Lane, where Fitzwilliam has recently secured planning permission for a hotel with restaurant, bar and 257 bedrooms. The development will involve the demolition of several buildings and the replacement of the top three floors of Arnotts’ car park with hotel rooms.

Including Fitzwilliam’s proposed Arnotts car park redevelopment, Dublin City Council has granted planning permission so far this year for more than 1,200 hotel and aparthotel rooms within a 175m radius of the new Motel One site.

There is little doubt that the substantial influx of investment into the Abbey Street area will serve to improve its attractiveness as a touristic and shopping destination – in particular when coupled with other landmark redevelopment projects on adjacent O’Connell Street.

These include the Clerys redevelopment, which developer Oakmount believes it will complete in 2020, and the substantial former Carlton Cinema site, for which developer Hammerson is anticipated to submit a planning application next year.