Luxury retail brand agrees a rent of €750,000 for Iput-owned store 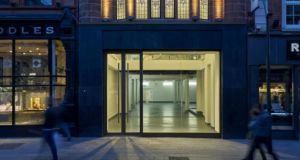 The White Company is set to move into no 72 Grafton Street.

A top performing UK clothing, homeware and fragrance business, The White Company, looks set to broaden the appeal of Dublin’s Grafton Street when it opens a large new store there early this summer.

The high-profile trader was one of four international companies pitching for 72 Grafton Street, all of them offering close to the annual rent of €750,000.

Founded by entrepreneur Chrissie Rucker in 1994 to provide “impeccably stylish, everyday luxury”, The White Company has a branch network of 57 stores in the UK and the US, as well as a discount facility in Kildare Village.

The handover of the building later this week comes after its owner, the Iput pension fund, spent about €2 million on reconfiguring the block and enlarging its shopping facilities. One of the benefits of the remedial work has been to highlight a stunning curved vaulted ceiling at first floor level.

“Of the various parties who submitted bids to rent the property,” Murray said, “The White Company as a luxury retailer selling designer quality items for the home are in my opinion the absolutely ideal fit to capitalise on the very special features of 72 Grafton Street.”

The distinctive premises date back to 1910, when they were designed as a cinema by architect Richard Francis Caulfield Orpen, a brother of the painter William Orpen.

The Grafton Picture House opened on April 11th, 1911, and continued to trade for more than 60 years until the building was substantially rebuilt and converted for retail use once Grafton Street had been pedestrianised.

Iput bought the building in 2014 for €12.5 million as part of a portfolio of investment properties from Bank of Ireland Staff Pension Fund.

With individual buildings on the street attracting higher values, Iput is likely to value the investment at more than €20 million. The White Company is in situ on a 20-year lease with a break option half way through.

Although the new-style building was ready to move into since last May and attracted considerable international interest – often at a higher rent than that quoted by JLL – Iput held out for a trader with a broad appeal and a need for a flagship store rather than a range of high street outlets.

Last year it opened its first flagship store in New York at 155 Fifth Avenue , and later a second store at The Mall at Short Hills in New Jersey.

Michael Clarke, Iput’s head of investment, said 72 Grafton Street had undergone an extensive refurbishment and redesign to meet the demands of leading international retailers for a flagship store on Ireland’s premier street.

“We are delighted to have secured The White Company as an occupier for what is one of the street’s most iconic buildings.”

Sarah King, director of property for The White Company, said the Grafton Street opportunity was perfect for the luxury lifestyle retailer.

Iput plc is the largest unlisted property vehicle in Ireland with 95 properties in its portfolio at a net asset value of €2.3 billion. Iput owns and manages an extensive retail portfolio in Dublin, valued at more than €470 million.

The joint letting agent was Kevin Sweeney of Savills, while Peter Leverett of Space advised The White Company.