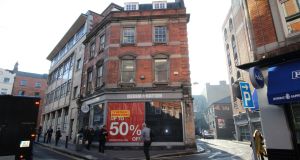 A company whose majority shareholder is a US-based fund associated with Grand Coast Capital (GCC), has sought planning permission to develop a new 38-bedroom hotel at 13 Trinity Street in Dublin 2.

Last year the three-storey-over-basement period property emerged on the market for €4.2 million and was acquired by an investment vehicle, Torchglen. It now plans to demolish an existing 240sq m extension to the rear of the property and replace it with an eight-storey-over-basement extension some 1,181sq m in size. The original Trinity Street structure will be fully refurbished and the new hotel will feature a restaurant and bar.

Torchglen is about three-quarters owned by GCC, while local partner Bridlewood Investment Trust holds the remaining quarter. Bridlewood is associated with Colm Gunne and Gerry Conlan, the latter a prominent developer who formed part of Anglo Irish Bank’s so-called “Maple 10” group. Gunne and Conlan sit on Torchglen’s board of directors, alongside GCC’s US-based chief executive, Jeff Carter, and US property investor Paul Esajian.

In addition to the Trinity Street property, GCC and Bridlewood have recently completed a number of acquisitions together, including the nearby Shamrock Chambers property on Dame Street, which was for sale last year seeking €1.9 million. They have also invested in Waterford, acquiring the substantial Waterford Retail Park at Six Cross Roads.

The complex comprises six retail units extending to 9,410sq m in total, with the benefit of 342 parking spaces. Musgraves occupies one large unit, while the remainder are currently vacant. The investors hope to amalgamate all the vacant units in order to lease a large combined unit to The Range, a home and garden superstore that has recently expanded into Ireland, with stores in Limerick, Cork and Dublin.

GCC was already well acquainted with Waterford prior to its partnership with Bridlewood, as it has already acquired a number of properties and a swathe of underground parking spaces at the Railway Square complex in Waterford city. It has also purchased the nearby Broad Street Shopping Centre.

The firm has been active in the Irish property market this year, following its acquisition of Swords Plaza for about €14.5 million and Skerries Point Shopping Centre for €3.4 million.

Conlan and Gunne are also pursuing other property deals outside of their partnership with GCC. They recently bought well over 100 acres at Jigginstown, Naas, Co Kildare, through Sassabunda, a newly-formed investment vehicle.

Details filed with the Companies Registration Office reveal that the deal is funded by Fairfield Real Estate Finance, an Oaktree-backed funder whose minimum deal size is €10 million. It has funded other recent Irish deals, such as MM Capital’s acquisition of a €22 million office in Dublin.

In the 2011-2017 Naas development plan, the lands were zoned as agricultural.

But given Fairfield’s willingness to offer financial backing and the fact that adjoining lands are zoned residential, it seems likely that these lands will be rezoned in the future – perhaps in the new Naas development plan.

If rezoned and developed, the lands could deliver hundreds of new homes and position Conlan as a major developer in the Naas area once again.

1 Brexit: System agreed for Irish goods to skip checks on UK trade
2 ‘The rental situation stops me moving back home’
3 David McCullagh announced as co-host of RTÉ Six One News
4 Why are markets booming when a crash is on the way?
5 Ireland faces 'deep downturn' this year and may not rebound until 2024 if there is a second wave
6 Dublin-founded Future Finance agrees £100m debt facility
7 Could your old car be giving away all your secrets to its new owner?
8 Dunnes Stores trials online ordering from Cornelscourt outlet
9 Ryanair pilots accept 20% pay cut, airline says
10 Former Worldspreads chief Conor Foley faces €730,000 fine
Real news has value SUBSCRIBE