Bids due for €60m sale of Carton House golf resort 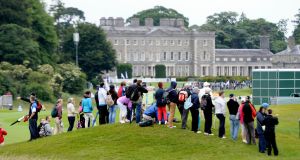 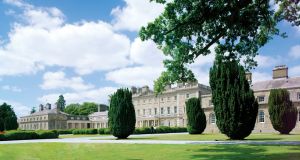 First-round bids are due on Tuesday for the Nama-backed sale of the Carton House golf resort, near Maynooth in Co Kildare, which is on the market for a reputed €60 million.

A number of wealthy Irish business families are expected to bid, along with several international trophy buyers.

The Guinness heir Edward Iveagh has indicated that he may submit an offer, and industry experts believe the estate might appeal to the businessman JP McManus, who also owns the Adare Manor resort, in his home county of Limerick.

A hospitality consortium involving the US cable-industry magnate John Malone and the Irish builder John Lally is expected to table a bid, too, although it is understood not to be considered a front runner.

The property, which is being sold on behalf of the Mallaghan and Kelly families by the CBRE estate agency, includes a 165-bedroom four-star hotel and two championship golf courses.

Between 400 and 500 acres of development land is believed to be excluded from the sale, as it did not fall under Nama’s control.

Carton House’s Montgomerie course, which despite its inland location was designed in a links style by the Ryder Cup winner Colin Montgomerie, has hosted the Irish Open three times. The O’Meara course, designed in 1998 by the major winner Mark O’Meara, is a parkland course that has hosted several big amateur events.

The hotel has also hosted training camps for sports teams, among them the Real Madrid soccer team, in Ireland for a preseason friendly, and the British and Irish Lions rugby team, ahead of their tour of New Zealand.