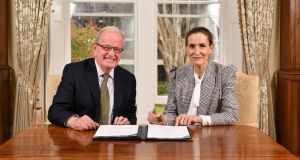 The University of Limerick has confirmed the purchase of a former Dunnes Stores shopping centre in the city, which will form a key part in a €50 million campus development by the college.

At a dinner in the five-star Adare Manor resort organised by the University of Limerick Foundation on Friday evening, the college’s president, Dr Des Fitzgerald, confirmed that contracts had been formally signed with Dunnes to acquire the 5,500sq m former shopping centre.

It is understood that the university is paying €8 million to acquire the site – close to the river at Sarsfield Bridge – from Dunnes. The purchase paves the way for the development of a campus for the college in the city centre.

Dr Fitzgerald praised Dunnes Stores, the Republic’s biggest grocery chain, for facilitating the deal. “I am delighted to announce that we have now formally signed contracts with Dunnes on the acquisition of the riverside site at Sarsfield Bridge, which will bring UL directly in to Limerick city and contribute in a major way to the city’s rejuvenation,” he told the annual fundraising dinner for the college. “Connecting this campus with the city has been a dream for everybody associated with the university for years.”

Separately, Dr Fitzgerald confirmed that UL would start construction on a new access route on the northern part of the campus, opening it up for the first time to Co Clare. The access route will facilitate the plans of Clare County Council to develop an economic strategic development zone adjoining UL.

Dr Fitzgerald said the developments were part of UL’s strategy to prepare for the next 50 years. “If the university is to continue to be an important part of the regional infrastructure, we need to plan now for the needs of the region over the coming decades,” he said.

“We can’t let the university be defined simply by its location close to Limerick city. We must create a regional and national institution which will support economic, cultural and social development right across the region and indeed more widely across the country for decades to come.”

Dublin Port accounts for two-thirds of vessel arrivals, half of goods handled 11:14
Tullow shares rally as African oil veteran’s stake nears 10% 10:27
Britain after Brexit will not be alone, but it will be lonelier 10:17
Election 2020: Parties' pledges on housing simply don’t add up 09:45
First-time buyers drive growth in mortgage values and volumes 09:20