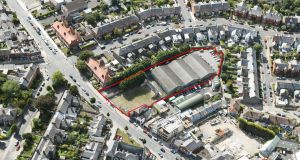 Northern Ireland-based developer Padraig Drayne has emerged as the buyer of the former Classic cinema site in Dublin’s Harold’s Cross.

While Drayne acquired the 1.25-acre plot for more than €8 million last February, his association with the property has only just emerged in the submission of a planning application by his company, Garvagh Homes, to Dublin City Council for the development of 91 apartments alongside retail and office space.

Mr Drayne, a frequent business partner of Belfast-born property investor Paddy McKillen, paid a premium of about €2 million to secure the Classic cinema site following a competitive bidding process involving a number of parties. The property had been brought to the market on behalf of property investor Michael Roden last October by Knight Frank at a guide price of €6 million.

While a feasibility study prepared by architects O’Mahony Pike in advance of the sale suggested the site could accommodate a residential scheme of 76 apartments as well as retail space, Mr Drayne’s planning application to Dublin City Council is more ambitious in its scope.

The developer is seeking permission for the construction of 91 apartments. Distributed across three blocks, the residential element of the development would comprise four studio units, 29 one-bed units and 58 two-bed units, over an underground car parking area for 93 cars. The proposed scheme would also include 177sq m of retail space and 199sq m of offices.

Mr Drayne’s partnership with Paddy McKillen meanwhile, is a long-standing one. In 1994, the two men acquired the 3-acre site of the former Jervis Street Hospital for £6 million (€7.6 million) and went on to develop the Jervis Shopping Centre at a cost of £76 million (€96 million).

In 2004, the pair were members in the consortium that acquired what was then known as the Savoy Hotel Group for around €900 million. The portfolio comprised the world-famous Savoy Hotel, Claridge’s, Connaught and Berkeley hotels.

The two businessmen continue to share a number of other property interests through their company, Belfast Office Properties. Its various assets include the Forge Shopping Centre in Glasgow, and Ards Shopping Centre in Newtonards.