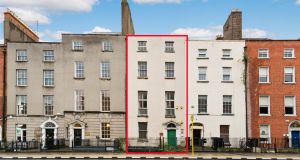 56 Parnell Square West occupies a high-profile location opposite the entrance to the Rotunda Hospital.

Having secured about €4 million from the sale of its former Merrion Square headquarters to developer Glenveagh Properties in 2018, the trade union, Unite is offering another Dublin property for sale.

On this occasion, the union has instructed agent Cushman & Wakefield to find a buyer for 56 Parnell Square West on the city’s northside.

Known more commonly as UCATT House owing to its former role as the home of the Union of Construction Allied Trades and Technicians, the building is recorded on the National Inventory of Architectural Heritage (NIAH).

According to it, the property was built by Andrew Reid in the period between 1763 and 1773, along with numbers 52, 53 and 57 Parnell Square West. Commenting on the architectural value of the subject property, the NIAH says: “This house has been cement rendered but retains a fine pedimented doorcase and this and its general facade composition contributes to the grandeur and wealth of architectural detail displayed on the west side of Parnell Square.”

While the property’s external appearance has been altered by the addition of cement to its brickwork, it retains numerous of its original features including cornicing and sash windows.

The sale is being handled by Nicole Heffernan and David Bennett of Cushman & Wakefield. Having advised Unite on the disposal of 15 Merrion Square two years ago, they are guiding a price of €1.25 million for 56 Parnell Square West.

They say: “This sale presents an opportunity to acquire a charismatic period property in a distinguished area of Dublin city centre. The property offers scope for refurbishment to top-class office accommodation.”