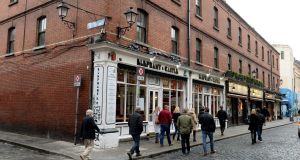 One of the seminal retail blocks in Dublin’s thriving Temple Bar area, including the Elephant & Castle restaurant, is due to be offered for sale early in the new year.

The Dublin-based private investment manager, Ardstone Capital, which bought the portfolio in the summer of 2014 for €8.26 million, has not yet set an asking price, but its selling agents Bannon is expected to look for at least €13 million, a figure which will provide a return of about 5 per cent.

Ardstone bought the complex from Bank of Scotland (Ireland) in considerably weaker market conditions when it was listed among a number of distressed assets held by Treasury Holdings before it was wound up.

Some of them are currently being upgraded and amalgamated to boost the overall rental income, which is already above €583,000 and expected to exceed €700,000 by the time it goes for sale.

Most of the tenants operate restaurants and food outlets which continue to trade strongly as a result of the ever-increasing number of visitors to Temple Bar.

The best-known tenant in the portfolio, Elephant & Castle – one of the busiest restaurants in the city for the past 30 years – is paying a rent of €160,000; Gallagher’s Boxty House contributes €120,000 for a slightly smaller premises; Pablo Picante is contributing about €50,000 while the other tenants include Forbidden Planet and Mark Cheung. The complex has 1,579sq m (17,000sq ft) of retail space at street and basement level.

Crampton Buildings was developed by Dublin Artisan Dwellings in the 1890s and consists of a three-storey-over-basement block with retail and restaurant use at ground and basement levels. The 54 apartments on the two upper floors, accessed from Asdills Row, were bought in the 1998 by Dublin City Council for €3.5 million to ensure that the tenants would be able to stay there.

The complex is currently being upgraded and the 54 apartments are being reconfigured to just 28 two-bedroom units.

Ardstone looks set to reduce its holdings in the Irish commercial property market as it turns its attention to the new homes sector, where it plans to build more than 4,000 houses. A subsidiary company, Ardstone Residential Partners, has €110 million in funding to proceed with new housing developments.

This summer, the company was reported to have paid close to €50 million for 128 acres in six sites assembled by David Daly’s Albany Group in commuter towns close to Dublin.